The Free Fringe Festival in Amsterdam 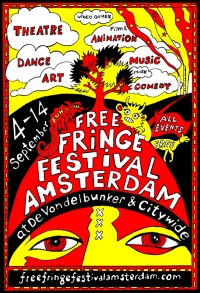 Formed as a reaction to more commercial festivals, such as the Amsterdam Fringe Festival that takes place at the same time, the Free Fringe Festival Amsterdam aims to bring some of the city’s truly unusual and underrated acts to the stage. Organised and performed entirely by volunteers, there is no financial incentive whatsoever at this festival. Both artists and organisers take part simply for the love of their creations.

The Free Fringe Festival brings a wide range of different attractions to the city while it runs, from respected plays to wild nights where rock bands and DJs take to the stage. Stand up comedians often make an entrance to the festival, as do musicians, DJs and actors of almost every description. See the festival’s website for details of the lineup for each year.

One recurring event that is always worth a visit is the Warp Zone show, which showcases artwork and memorabilia related to video games, as well as providing a place for visitors to play retro games consoles while drinking beer. Fay’s Film Festival is another fun regular night at the Free Fringe Festival. Showcasing animated films of any style from a wide range of countries, this mini film festival is always a great place to see something unusual.

The Free Fringe Festival runs from 4-14 September each year to coincide with the much more commercial Amsterdam Fringe Festival, which it exists as a counterpoint to. The festival is spread out between a number of Amsterdam venues, including the Vondelbunker, a fantastically atmospheric bunker under the bridge in Vondelpark, and De Nieuwe Anita, a well-established but still under-the-radar hangout of Amsterdam’s hipster crowd.

Admission to any event that forms part of the Free Fringe Festival Amsterdam is, of course, entirely free. The timing of events varies, from 14:00 in the afternoon for workshops and events aimed at children, to late night starts for music and comedy acts. Check the festival website for details.