Tradition of King’s Day in the Netherlands

King Willem-Alexander was born on April 27, 1967 and today his birthday is celebrated all over the Netherlands as a festive day with a street carnival in all bigger cities. Amsterdam is the center of all King’s Day festivities with many street parties and parties on boats sailing through the canals. There is also a tradition of the flea market in the city center.

If you feel like touring the town with a knowledgeable guide, then have a look at the offers at guided Amsterdam tours website.

The King's Birthday began as the Queen’s Day 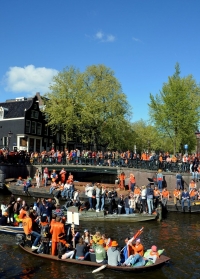 When Queen Beatrix succeeded Juliana in 1980, she decided to keep the Queen's Day on April 30. Her own birthday is in the middle of winter (January 31), so celebrating it outside was seen as not practical. King Willem - Alexander was born on April 27 and now this day is celebrated each year.

There is a rule that if the day of April 27 falls on the day free of work, the King's Day is celebrated on the day before. 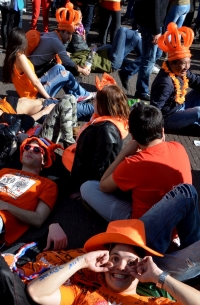 Traditionally, on this day the King Willem-Alexander with his wife Queen Maxima of the Netherlands visit one of the cities in the country, and meet celebrating people. Television reports live on these meetings during the day.

Celebrating Queen's Day means dressing in orange clothes (as the reigning dynasty is House of Orange and this is their color), painting faces and hair orange, drinking drinks tinted in this color (or just natural orange juice), wearing mock orange crowns, dressing as the king or the queen and making jokes at the royal family. As some of the jokes may seem to you slightly inappropriate, they express deep attachment Dutch people have to their Royal Family, which seen in the Netherlands as the symbol of national unity.