Transportation during the King's Day 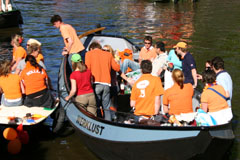 The Dutch railways have always a special train schedule for this day. Their main task is to bring Dutch people to the city and back home. Therefore, international trains do not stop on Queen's Day on the Central Station, but depart from one of the following stations: Schiphol, Utrecht and Amersfoort. On the Queen's Day, there are fewer connections by train with the Schiphol airport. You may also get to the Schiphol airport by bus 258 or 370 (from the Marnixstraat Bus Station).

Please note that the luggage lockers at Amsterdam Central Station and at Amsterdam Amstel Station are closed from 7 p.m. in the evening before the Queens Day, until 7 a.m. in the morning on the day after the Queen's Day.

On the Queen's Day, public transport does not function in a big part of the city center. Trams and busses are rerouted.
There are three simplified routes for all trams to facilitate transport to and from Central Station.
You should pay for the ticket using strippenkaart as any other day.

The whole car traffic in the center of Amsterdam stops. In principle, even the taxis may not enter the center of Amsterdam. In some years police stops cars already at the freeway exit, directing them away from the center.
If you are stuck with the car in town and you do not intend to stay for the Queen's Day, you have to leave early in the morning, at latest at 8 a.m. Later on, because of the crowd in all streets leaving the city will be impossible.

On the positive side for the car owners – you do not have to pay for the parking in Amsterdam on the Queen's Day (with the exception of the P+R car parks, where a fixed € 8 rate pays for the whole day).

We advise you not to park your car in the street in a direct neighborhood of the music concerts or parties. Your car may be involuntarily damaged by the celebrating people.