The Amsterdam Metro system was first introduced in 1977. It is a fast way of getting to distant areas of Amsterdam. Three of the four Metro lines start at Amsterdam Central Station. With 52 stations, the Metro serves major areas within Amsterdam, as well as the surrounding towns of Amstelveen, Diemen and Ouder-Amstel.

GVB is the public transportation company that runs the Amsterdam Metro system. It has an integrated service with GVB buses and tramlines. Depending on the length and purpose of your stay in Amsterdam, you may wish to buy an OV-chipcard which can be used throughout the entire Amsterdam public transport system.

For tourists we recommend the I amsterdam City Card which gives you unlimited access to the city's public transport system and other benefits like free entry to museums and attractions.

Public transportation cannot be used to get from airport to Amsterdam city. You will need special tickets. It is recommended to book airport train or taxi in advance. You can do so through our Amsterdam airport transfer webpage. 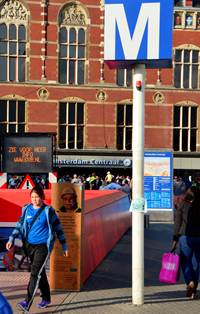 The Metro is an efficient and convenient way of reaching important locations such as the Amsterdam Ajax ArenA football stadium (Routes 50 and 54); the RAI Conference Centre and Amsterdam WTC (Routes 50 and 51); and the Vrije University of Amsterdam (Route 51). Several Metro stations are shared with train lines, including Amstel, Lelylaan, Zuid and Sloterdijk, which may further connect you with Amsterdam Schiphol Airport and the rest of the Netherlands.

The Amsterdam subway consists of four lines: the eastern lines to Gaasperplas and Gein; the Amstelveen line and the Ring line. These are shown on our Amsterdam Metro map.

Route 52, the North to South Line, is the first metro line to run beneath the IJ river to Amsterdam North.

Public transport in Amsterdam operates from 6am until midnight. However, some Metro trains will end their run before midnight, while others will reach distant suburban stations as late as 1am. Plan your trip online at www.9292.nl or through the free 9292 mobile app.

There are some very simple rules when using the Amsterdam Metro system<: