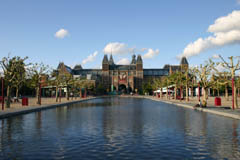 Nestled south of Leidseplein is the 19th century Museum square (Museumplein). It is the pinnacle of sophistication and home to the three major museums in Amsterdam, the Rijksmuseum, the Stedelijk Museum of Modern Art and the Van Gogh Museum. Without doubt, any culture vulture will be in their element in this recently renovated quarter. 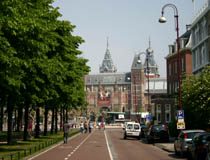 The Museum quarter is arguably the cultural hub of the city, offering a kaleidoscope of activities and attractions.

A stroll down the exclusive P.C. Hooftstraat, Pieter Cornelisz or Van Baerlestraat will take the fashionista into some of the world's most chic couture houses. From diamonds to leather shoes to designer handbags, just don't forget to take your credit card.

Museum square also caters for children or even the child in us with its skatepark and wading pool, which in the winter doubles up as an ice rink.

Another attraction of the district is Vondelpark where relaxing is the order of the day unless it is King's Day or Uitmarkt when the park is swarming with hoards of visitors.

It is also definitely recommended to go visit the modern art and music centre Melkweg which is very nearby. Look at the map below and read more on its dedicated page.

Accommodation at the Museumplein

You can comfortably look through Museumplein Amsterdam hotels or just check their prices and availability. Use the form below to look offerings on Booking.com.

Also, amongst the museums, stylish hotels and cafés, lays the majestic Concertgebouw.It is located on Van Baarlestraat and is home to the famous Royal Concertgebouw Orchestra (Koninklijk Concertgebouworkest). In the early 1800's, architects fiercely competed over plans to build a proper concert hall in the district but the battle ended with the prize going to architect A.L. van Gendt. Soon after, the Concertgebouw opened its doors to an excited public in 1888. Today, it is renowned the world over for its breathtaking acoustics and locally, for its free lunch during classical concerts. Every year, some 650 concerts reverberate in this venerable hall but if you want to catch a show, book early to avoid disappointment. If however, you don't get a chance to see a concert inside the Concertgebouw itself, you might just be in luck as the orchestra occasionally holds a concert outdoors.

Amsterdam museum square on the map