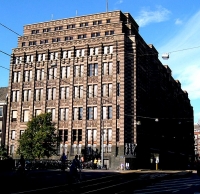 In an old city like Amsterdam, the Municipal archives are enormous. In 2007 the municipality moved them to the huge building in the city center, creating probably the biggest city archive in the whole world. It is much bigger than the archives of London, Paris or Rome.

This is because of the fact that important archives of companies (as Heineken or De Bijenkorf), institutions (as Concertgebouw) and historical persons (as a designer Benno Premsela) are stored at the Stadsarchief. The archive has also a rich collection of drawings and maps of Amsterdam from 17th and 18th century as well as historical photographs and films since the beginnings of these mediums.

For the visitor, the Stadsarchief mean not only possibilities of researching Amsterdam history. The archives aims at the large public – they organize exhibitions, tours of the their collection, projections of the archival films. 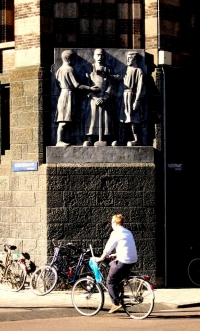 The Amsterdam archives are located in a building which is itself an architecture landmark. Designed as a main headquarters for an investment trading firm Nederlandse Handelmaatschapij, later taken over by the ABN AMRO bank, it has been built by an important architect of the beginning of the 20c. K.P.C de Bazel. De Bazel has been known at its time as an artist producing graphics and glass, designing furniture and building several synagogues in the Netherlands. This almost religious, full of mystique atmosphere you may still find at some parts of the Stadsarchief. The building was inspired by the North American architecture of the time. It has a concrete structure covered with granite with oak, granite, iron and ceramic interior. The construction took seven years (1919 – 1926) and the building’s creator died three years before it has been finished.

Original in its form, surprising inside, with a lot of natural light and unusual and rich décor, it is worth a visit on its own. Amsterdam Municipality purchased the building in 2000, under the condition that its monumental character will be preserved. Present reconstruction by an architect Felix Claus, brought the building closer to its original state removing some of the effects of some previous adaptations. Today, people from Amsterdam like the building and call it after its creator, simply - De Bazel.

An interesting place especially for people interested in Dutch history; certainly worth a short visit for everyone, since it is located in the very center of the town. Since inside, try to take a short glimpse of everything. 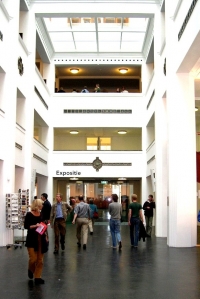 Walking: from the Munt square (5 minutes).
By tram: from the Central Station lines 4, 9, 16, 24 and 25; stop De Munt.
By car:  closest car park is at Stopera (Het Muziektheater/Stadhuis),on the Waterlooplein (10 minutes walk). If you are able to find a parking place, there is a metered parking in all canal streets in the area.

Municipal Archives of Amsterdam on the map