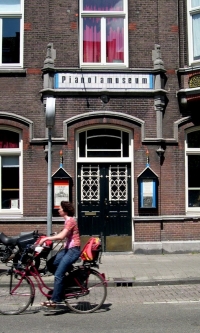 The Pianola Museum is a small museum of pianolas - automatic pianos invented round the turn of the century (1900). Pianolas were playable by hand as well as reproducing music using paper rolls with punched holes for each music note. As the recording of music on wax cylinders and gramophone records was still very primitive at the time, pianolas were very popular, with more than 2 million built. The public was impressed by the automatic music and quality of the sound, and pianolas seemed to be an invention of the future. Important composers as Stravinsky, Hindemith, and Milhaud have written pieces of music especially for pianola. The reproducing piano was capable of playing back a performance of piano music by famous pianists of the day or even the composers themselves..

The Pianola Museum in Amsterdam, located in the old district of the Jordaan, has several original, beautiful instruments, among them a Steinway grand piano, equipped with a player system, over 30 000 music rolls plus several other interesting memorabilia. 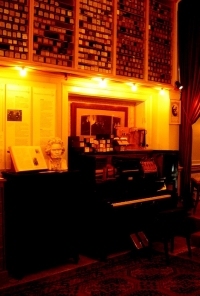 A unique, beginning of the 20th century atmosphere. Old furniture, dimmed light, interesting instruments. A small museum, about an episode from the history of modern civilization. Very interesting for people who are interested in music and its history. Might be also an idea for some kids.

Walking: The Pianola Museum is located in a short walking distance from the Anne Frank House (10 minutes).
By tram: 3, 10 (stop Marnixbad).
By car: Westerstraat being the widest street in the Jordaan, offers some parking possibilities (paid parking, directly on the street).

Pianola Museum in Amsterdam on the map