Oude Kerk has been throughout centuries known for its organ music. It is here, that one of the biggest Dutch composers Jan Pieterszoon Sweelinck, has been an organist. But an instrument he played on has been smaller and more modest. Learn more about the Oude Kerk history. 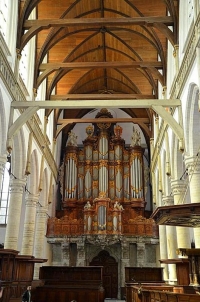 The huge baroque organ of Oude Kerk in Amsterdam is known for its unique sound and while the church has also two other more modern organs, it is often called a Grand Organ of the church. It has been built between 1724-1726 by a German Christian Vater from Hanover. The Oude Kerk Grand Organ has 54 gold plated oak pipes.

When the churches tower has been restored in 1738, the big organ had to be dismantled and it was rebuilt by Johann Casper Müller, who putting it together, modified the instrument. He added nine new registers and by doubling the principals in the treble, he gave the instrument its unusual force and unique sound. The Oude Kerk Grand Organ is therefore often also named the Vater-Müller Organ, thus giving the credit to both of its builders. In 1869-1870 the organ was once again revised and retuned by Christian Gottlieb Friedrich Witte. 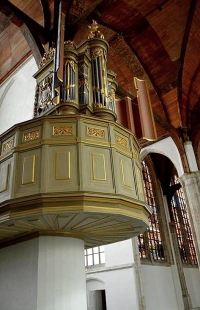 There are two less known organs in Oude Kerk: a so called the transept organ of the church which can be seen in the left nave, has been built in 1658 by Hans Wolff Schonat. As this smaller organ has been rarely used, the pipes from it were taken away in 1821, and used to build the Zuiderkerk organ. The instrument case hanged empty for a century above the church’s transept, until fifty years ago, a German organ maker Jürgen Ahrend together with Gerhard Brunzema, were ordered to built a new organ in it (1964-1965). This organ has been reconstructed and retuned in 2002 by the Dutch firm Flentrop from Zaandam, to sound again like a 17th C. instrument.

Oude Kerk has also a third, small organ: the cabinet organ  constructed by Deetlef Onderhorst in 1767. In 1946, the organ was repaired by organ builder A. Blik, who also modernised and made it electric. Most recent restorations were in 1977 and in 2001, when the organ was moved to the Oude Kerk choir.

The organ concerts in Oude Kerk have a centuries long tradition. It is here, that since an age of fifteen, classic Dutch composer Jan Pieterszoon Sweelinck (1562 - 1621) worked as an organist. Sweelinck remained at his post until his death, staying through the religious changes (in 1578 from a Catholic church, Oude Kerk with the whole city of Amsterdam became Protestant). At some moment of his career, the municipality paid Sweelinck to play the church’s organ for one hour on several days of the week. It was another instrument than built later grand organ – probably much smaller manual organ.

Today, the concerts (often played on two organs at once) and organ competitions at the Oude Kerk, have the world’s reputation among music lovers. Each summer The Sweelinck International Festival of Organ Music is being held. Please consult their website for the schedule.