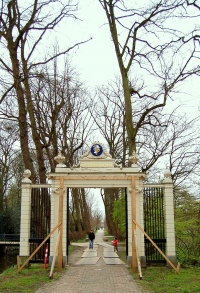 As Amsterdam rapidly grew in the sixteen and the beginning of eighteen century, the real estate in the city became so expensive, that rich people who wanted to enjoy a bigger property had to move further from the capital. The Park Frankendael (7 acres) in East Amsterdam, was originally one of these wealthy estates. The entrance to the park with an old ornamented gate is at the Middenweg, less than one mile (1300m) from the Tropenmuseum, driving out of the city. The beautiful old land house Frankendael (built in 1659) is visible from the street – it is one of the few of these estates remaining in Amsterdam

Frankendael Park contains two historical gardens, both carefully restored at the expense of the municipality and opened in summer of 2004 for the public – the Style and the Landscape gardens.

The Style Garden located directly behind the land house, has been created in the Regency style around 1730. It has been carefully restored following old prints and more recent drawings made in 1942 for his book about the Amsterdam gardens, by the landscape architect J.T.P. Bijhouwer.

The Landscape Garden adjoining to the estate presents diverse Dutch landscapes, from different provinces, recreated here with a great care.

The rest op the park also differs in its character. There is a part in an English free style, with a small ruin on the island, and there is a newly created part, more spacious and empty. 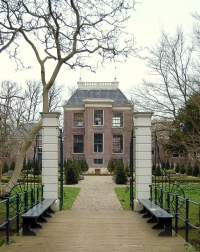 Still under intensive renovation and scheduled to open in August of 2008, the historical Huize Frankendael has been rebuilt into the cultural and business complex. It will include a restaurant, an exhibition rooms and a music space. Behind the house, the terrace opening to the Style Garden will be created. The Huize Frankendael will host art shows, seminars, small theater shows as well as workshops for kids.

The land house itself is worthy a visit to the Frankendael Park. Although modernized inside, from the outside it retained its historical character. Two sculptures dating from 1714 representing Roman gods - Bacchus (symbolizing autumn) en Ceres (symbolizing summer) by a sculptor Ignatius van Logteren stand in front of the house, another smaller sculpture stands in the garden.

An Old Dutch country estate, turned into the municipal park. Not far from the city centre, worth seeing, relaxing.

By tram: line 9
By bus: line 41, exit on a stop Hogeweg.
By car: drive away from the city along the Middenweg from the Tropenmuseum. The Frankendael Park will be on your left (metered parking). Driving from the ring, take an exit S113 and drive direction the city centre. The first green space at the Middenweg is a cemetery; the estate and the park will visible a moment later on your left hand side.

Frankendael Park in Amsterdam on the map