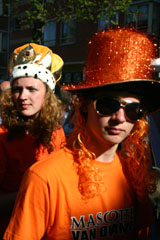 The Queen's Day is celebrated in the whole Netherlands since more than fifty years. Amsterdam celebrations are the most attractive. Last years the popularity of the event grows drawing crowd of visitors from all over Europe. 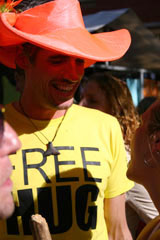 At the end of January 2013, Queen Beatrix of the Netherlands, the longest reigning Dutch monarch, announced her abdication after 33 years on the throne. 75 years old Beatrix said she would abdicate on 30th of April and her oldest son Willem-Alexander will become the King of the Netherlands.
The last Queensday will take place on Tuesday 30th of April, 2013, the first King's Day on Saturday 26, 2014, one day before Willem-Alexander’s birthday. From now on the King’s Day will be held on April 27 each year.

The Dutch love to trade, they have it in their blood. The Queen’s Day is an occasion to trade all things that are unnecessary at home with your neighbors and visitors to town. More a social occasion than a real commercial opportunity, the free market (Vrijmarkt) is a unique family event with children actively participating. Prices are symbolic and the most important is fun.

Amsterdam transportation during the Queen’s Day

As the large part of the Amsterdam centre is fully filled with the celebrating crowd, no transport is possible there, you will have to walk. No cars are allowed on the Queen’s Day to the Amsterdam centre. All public means of transportation, including trains, have a special schedule for this day.

Celebrating Queen's Day begins already on the evening of the day before, usually at 7 p.m., and goes on until the early hours of the Queen's Day. It is so called Queen's Night, when all clubs across the Netherlands organize special festivities. Especially for the young people this is the night to be in Amsterdam. Amsterdam is very busy that night as many young people move across the city from one party to another, while others prepare the next day market.

Traditional singing and dancing in Amsterdam during Queensday

The quarter of Jordan is the most crowded on the Queen's Day, not only with traders, food stands and beer taps but also with large groups of people singing traditional Dutch songs. These are simple, rhythmic songs mostly describing the beauty of Amsterdam. While you might not be able to follow the words, the atmosphere is always unique, friendly, relaxed. Enjoy it!

Rock concerts and partying in Amsterdam during Queensday 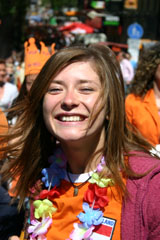 A rock concert on Museumplein begins usually at 11 a.m. and goes on until late in the afternoon attracting thousands of young participants. Other places with disco music live and recorded are Leidseplein and Stoperaplein (at the Waterlooplein).

All clubs in Amsterdam organize parties on this day. In many parts of the city, speakers with loud music are put out on the street and improvised parties take place. It is natural to join them, even if you do not know the participants.

The boats full of dancing people circulate Amsterdam canals. You may observe most of them on the Prinsengracht, in front of the Anne Frank's House. Many boats have own, amplified music and are in fact sailing parties.

Amsterdam, being an important city for the world's gay scene, celebrates Queen's day in all traditionally gay clubs and bars. Usually a big open-air party for gay and gay friendly people is held on the Westermarkt at the Homo Monument (beginning at 11 a.m. on the Queen's day until late in the afternoon), and another one at the Reguliersdwarsstraat, in a 10 minutes walking distance from Leidseplein.

If you plan to visit Amsterdam during the next Queen’s Day (April 30, 2013) make your hotel reservation many months in advance. There is absolutely no chance to find a good hotel or even youth hostel on the last minute, any private apartments or bed and breakfast's are usually taken years in advance.