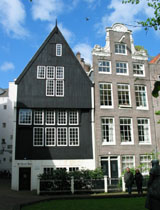 The oldest house in Amsterdam

Het Houten Huis (No. 34.) is Amsterdam's oldest house, dating from around 1420. It is one of only two wooden-front houses in the city, as timber houses were banned in 1521 after a series of catastrophic fires. Most of the houses in the Begijnhof were not built until after the 16th century.

The city's oldest house, Het Houten Huis (1420), is located at number 34, the south-wester fringe of the Begijnhof courtyard.