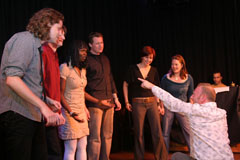 Although not as big and boisterous as Boom Chicago, Easy Laughs has carved out a niche among local expats and tuned-in tourists looking for a raw, laugh-out-loud improv, Amsterdam style. The cast includes an international mix of Dutch and English-Speaking actors who have been playing together for over three years (admittedly more for the love than money). The clash of cultures is a great way to gain insight into the Dutch “sense of humor” and culture as well as maybe have a laugh at your own.

The company performs most Friday Nights at the Crea Theater on the campus of the University of Amsterdam. There are two shows every friday starting at at 8pm and 9pm. Also there are workshops at the Crea every Sunday from 12 till 2pm. No two shows are the same and the intimate theater setting makes for an unforgettable, in-your-face comedy experience. See the show for € 10, students for €4. 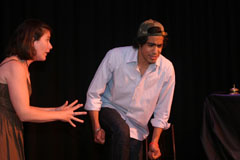 As well as performing, the company also puts on workshops in English for those looking to step out into the world of improv. All of the actors are professionally trained instructors and lead 8-week courses for beginners on up to advanced master classes.

The troop is also available for corporate events and can often be seen around Amsterdam competing in festivals and generally raising a ruckus wherever they perform. See their website for details.

Anna a member of the group also has her own company offering drama lessons for kids and teenagers in English in Amsterdam.

Easy Laughs comedy theater in Amsterdam on the map