Booking airport transfer, attraction tickets or guided tours in advance is highly recommended whether you are visiting Amsterdam during a major event or not. You can read more about online tickets resources on our main Amsterdam events webpage.

The Imagine Film Festival promises ten days full of fantasy, anime, thriller, cult, horror and sci-fi movies. Screenings of the movies are at the EYE Film Institute in Amsterdam Noord, across the IJ river. This April Amsterdam festival offers a great opportunity to visit this beautiful and special building. Take the ferry departing from Amsterdam Central Station, to reach EYE.
www.imaginefilmfestival.nl

The World Press Photo is with 80.000 photo entries the biggest press photography competition in the world. The exhibit of the best pictures is held in the Nieuwe Kerk in Amsterdam at the Damsquare, next to the palace. In this church the Dutch King and Queen got married in 2002.
www.worldpressphoto.org

Awakenings is a four day techno music festival held in the Westergasfabriek in the Westerpark. During the year Awakenings organizes many parties in clubs and venues in Amsterdam and is seen as a techno constitution in the Netherlands. Check the website to go to one of the many Amsterdam events.
www.awakenings.com 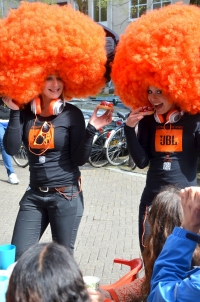 Amsterdam King's Day (Dutch: Koningsdag, formerly Queensday) is the national celebration of the birthday of the King. The celebrations take place all over the Netherlands, but are the biggest in cities like Amsterdam, Rotterdam or The Hague. King's Day is by far the largest open-air Amsterdam event of the year, with up to one million people travelling to the city. Places in the city centre like the Dam, Museumplein, Rembrandtplein, Leidseplein and the whole Jordaan area are bursting with celebrating crowds wearing orange. During this day people are allowed to sell stuff on the streets, so it's great for secondhand shopping. Go to the Vondelpark to buy an original souvenir and watch the many kinds showing of their talents to earn some money.