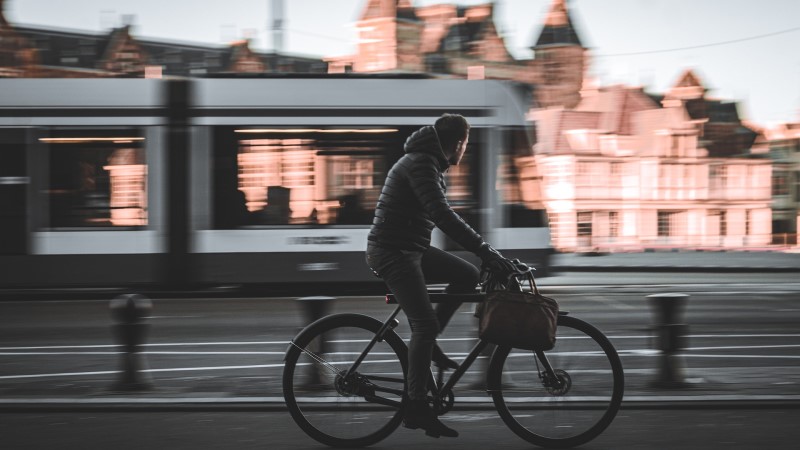 To move around the city is sometimes necessary but sometimes just an interesting ride. Amsterdam transportion is usually cultured and well organized. No reason why not to give it a try.

From Amsterdam airport to the city centre

A direct railway line connects Schiphol International Airport with Amsterdam Central Station, and is the fastest and most convenient form of transport to the city centre. The ride takes 15 minutes and the trains depart day and night every day. From 6am to 1am train departs every 15 minutes. From 1am to 6am the train departs once per hour on the 00 minute.

We recommend to buy an online train ticket so you can avoid complications and get on the train immediately.


To read more about other methods of Amsterdam airport transfer read more on the page dedicated to airport transfer topic by clicking the title above. Bus from nearby village, taxi directly to your hotel or flexible car rental. And if you need to store your luggage we have a page about that too.

On our other pages you can also read information on transport from Eindhoven Airport, Rotterdam-The Hague Airport and Lalystad airport.

Amsterdam is a wonderfully walkable city, with most major attraction in or near the city centre.

The streets in the Amsterdam old town are clean and safe and full of things to see, smell or hear. It is surely interesting to go on an adventure. Either by yourself, with company or with a tour guide. Looking at the people, shops, architecture, and percieving the atmosphere is much stronger if you slowly and closely walk throught the streets.

For attractions or just destinations that are too far to walk to, the public transport is excellent. Driving is strongly discouraged within the canal ring.

To use this service you will need tickets for Amsterdam public transport. One ticket can be used for all metro, tram and bus services.

For unlimited public transport for tourists we recommend the Amsterdam discount card which also offers other benefits like free entry to museums and attractions.

Amsterdam Trams run regularly until 12:15am. Since not all cities have trams it can be an interesting ride for both children and adults.

Amsterdam Buses are primarily used to reach outlying suburbs during the day.

Night buses are available after the trams have stopped running from 12:30 until 7:00. With routes connecting to Central Station, Rembrandtplein and Leidseplein.

Amsterdam Metro system currently has five lines in service that can quickly take you to the distant suburban areas of the city. Some of the metro stations (e.g. Amstel Station and Sloterdijk) share their platforms with regular trains, which make them convenient points for travelling out of Amsterdam.

Amsterdam ferries can transport you through and along the Amstel river and can be an interesting addition to your stay in Amsterdam. Many of them leave from the central station and are available day and night. Most popular is the one that goes to the Eye Museum.

Some would say that the only way to truly experience Amsterdam is by bike.

There are dedicated bicycle paths throughout the city, but on crowded streets and pedestrian zones you are expected to push your bike while walking. Cyclists are well respected on the roads and people are used to bicycles being parked everywhere. Also there are very few hills to conquer. All of this bicycle friendly environment makes cycling a safe and convenient Amsterdam transportation option.

It is not recommended to drive to Amsterdam city center due to its narrow streets, frequent construction and high parking fees. However if you do, look out for bikers and pedestrians. They are everywhere. Also be prepared to wait behind unloading trucks without being able to pass them. If you have electric car the infrastructure is there.

Finding an on street parking spot in Amsterdam is not easy and you have to pay for it everywhere. The rate is €7,50/hour in the city center and gets cheaper as you get further away. But there are also commercial garages.

Another popular option is to park at the Park+Ride parking lots at the A10 ring and continue by the public transport. But these large open parking lots are not guarded.

Taxi's are available at most tourist hubs including Leidseplein, Dam Square and Central Station. Hailing a taxi can be difficult, especially on weekends, but cab service is generally prompt if you call ahead. You can reach the Amsterdam city taxi line on 0031 (0) 900 677 7777.

For an alternative Dutch taxi, catch one of the many bicycle taxis around the city. The pedal-powered taxis can carry up to two people and are cheaper than conventional taxis.

Rent a car in Amsterdam

Although driving in Amsterdam is not recommended, Amsterdam car rental services are readily available at Schiphol Airport and in the city centre along Overtoom Straat, near Vondelpark. All major agencies are represented including Avis, Budget, Europcar, Hertz, National and Alamo.

Driving and parking in the city may be worth for those who have chosen to travel through the Netherlands by car and don't want to change modes of transportation.

By Bus Around Europe

By taking advantage of the low cost bus companies you will be able to reach your destinations without having to take frequent changes of trains or planes nor the exhaustion from driving.

There are many interesting cities just a short bus ride from Amsterdam. For example Hague, Rotterdam, Antwerp, Ghent and Brussels. And our favourite, the well known Bruges.