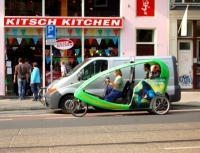 Bike taxis are a new kind of urban gondola and the perfect way to get around Amsterdam. No air pollution. No noise, apart from the odd squeak and the occasional bell ring. No hassle. Bike taxis are three-wheeled post-modern style rickshaws with open windows and fluorescent sides that carry up to two passengers. Originally a German design, they are pedal-powered and come with two small batteries to enable the driver to steer over Amsterdam’s infamous bridges or to carry extra heavy passengers.

For years, bike taxis have graced the roads of other major European cities like Zurich, Berlin and London. The Netherlands naturally seemed like the next city to test out these super cool taxis, a cheaper alternative to the overcharged conventional taxis. Since April 2003, locals and tourists have been able to hitch a ride in one of the 11 bike taxis dotted around Damrak, Leidseplein and near Dam Square.

Check out prices below: