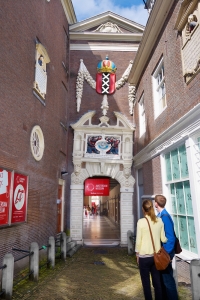 There is an impressive NEMO museum for children in Amsterdam. A hands-on science and technology exhibits housed in the unique, boat-shaped building. Nearby, there is Het Scheepvaartmuseum. The National Maritime Museum of Netherlands. It has a full size replica of a Dutch trading ship docked on a pier. Museums such as the Tropical Museum and Jewish Museum also include children's section.

These are great offers for people who wish to visit more Amsterdam museums. Some of these cards are valid not only in Amsterdam but in the whole Netherlands. And some offer also public transport or canal cruise. Compare the different offers.

Most Amsterdam museums remain open during Christmas (Christmas day, Boxing day and New Year's day) and Eastern Holidays (with opening hours like on any Sunday and Monday). But pay attention to the festive celebration of the King's Day, when some museums will close. However the most popular museums will remain open even on this day. Some Amsterdam museums might have shortened opening hours during these holidays. To be sure check the museums website for exact timetables. These are just general information.

There is one challenge to the wealth of Amsterdam museums. They are often crowded. And you can spend long time in the waiting lines. Since we are sure you don't want to spend your holiday time in a waiting line we recommend to buy your
Amsterdam museum tickets online.
Tickets bought through this ticketbar service have skip the line attribute. Very useful. 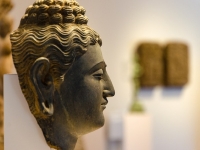 One of the largest and most interesting history and art museums in the world. Has a great collection of paintings and objects of material culture, prints and classic photography. Recently rebuilt and modernized, the Rijksmuseums show is modern in the way of presentation and respectful towards its beautiful historical building. 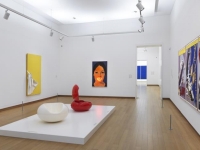 One of the world's richest collections of contemporary art. Its new white building integrally connected to the 19th century museum surprises with originality of its architecture. The Stedelijk Museum collection of ninety thousand modern paintings, sculptures, photographs, graphics, design objects and video artifacts is not to be missed. 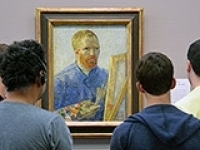 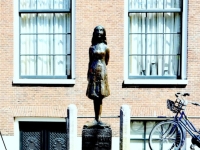 A hidden annex of Amsterdam canal house, where two Jewish families hid from persecution by the Nazis from July 6, 1942 until their betrayal in August 4, 1944. It is here that Anne Frank, only 15 years old at the moment of her death, wrote her famous diary. You may visit the modest hiding rooms of the annex, but also see an original of the diary and an exhibition about the time of hatred brought on people by the Nazis.

Dutch people have a conscience of their history and love of their country tradition. Their historical museums are never dull and in a spectacular way illustrate the intricate and rich character of the nation. The renewed Het Scheepvaartmuseum - The National Maritime Museum is real fun to visit.

Fun museums and exhibits in Amsterdam

Avid sailors and traders, the Dutch have alvays been welcoming to visitors, tolerant and open to the outside world. Today, Amsterdam city has a fame for being permissive. Several attractive exhibits have been prepared for tourists. Some recognized Dutch brands such as Heineken and Ajax, other on themes such as sex and soft drugs.

Dutch love nature and the country is the world's biggest exporter of flowers. The botanical garden, one of the oldest in the world, bears still its historical Latin name, Hortus Botanicus and Amsterdam zoo called Artis, small and old fashioned is very pleasant to visit. A number of smaller institutions complete the picture of Amsterdam museums of nature.

In Amsterdam, museums of technology have been created mostly for kids. Such as NEMO or Electric tram line museum, but there are also some smaller museums, which continue grow up as private collections. Sometimes really small, set in one room, such as the Computer museum, they document the fascination with quickly changing technology.

Museums and exhibits focused on hobbies, collections and lifestyles

Amsterdam has a tradition of the city of joy and tolerance. Its people like to party, to sing and dance in the public. Tulip craze may have been gone forever centuries ago, but flowers remain an important element of Amsterdam everyday decorum. Last century brought also interests in design and fashion. Amsterdam has become one of the capitals of fashion in Europe. There are a number of museums in Amsterdam that exhibit specific parts of life.