For more than two years Anne Frank and her family lived in the annex of the building at Prinsengracht 263 where Anne’s father, Otto Frank, also had his business. The Van Pels family and Fritz Pfeffer hid there with them. The doorway to the annex was concealed behind a moveable bookcase constructed especially for this purpose. The office personnel knew of the hiding place and helped the eight people by supplying them with food and news of the outside world. On August 4th, 1944, the hiding place was betrayed. The hidden people were deported to various concentration camps. Only Otto Frank survived the war.

Nowadays, the rooms at the Anne Frank House, though empty, still breathe the atmosphere of that period of time. Quotations from the diary, historical documents, photographs, film images, and original objects that belonged to those in hiding and the helpers illustrate the events that took place here. Anne’s original diary and other notebooks are on display in the museum. In the multimedia space, visitors can go on a “virtual journey” through the Anne Frank House, accessing background information about the people in hiding and World War Two. A contemporary exhibition is presented in the exhibition hall.

The Anne Frank House is often sold out months in advance. But if you are visiting Amsterdam in the next 3 months you may like the Anne Frank walking tour that is available.

During the summer-season many people from all over the world visit the Anne Frank House. This can mean people have to line up before entering the museum. Many visitors seem to be unaware of the fact that from March through October the museum is opened every day from 9:00 till 22:00. The museum tends to be quieter during the evening. Therefore, we would like to suggest our visitors to consider visiting the museum late in the afternoon/early in the evening. 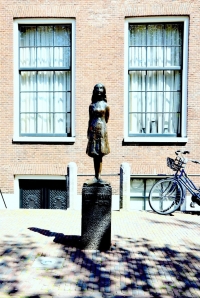 Museum Café and Museum Bookstore are on the premises. No cloakroom present. Big rucksacks not allowed. The Anne Frank House is not easily accessible for the physically disabled and only partly accessible for wheelchairs. Free leaflets in 8 languages are available at the entrance of the museum. A visit takes approximately 1 hour. Visitors are not allowed to take photographs or to film in the Anne Frank House.

How to get to Anne Frank House

You can buy these reviewed books about Anne Frank:

Anne Frank House in Amsterdam on the map