About Anne Frank, Biography and Quotes

“Despite everything, I believe that people are really good at heart.” The Diary of Anne Frank (1952)

Attend a guided tour about Anne Frank's growing up before she went into hiding. See where she played with friends and the shop where she bought her diary. You can read more and book it on this Anne Frank childhood tour webpage. 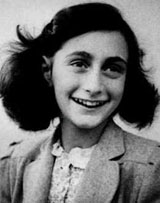 Anne Frank, the Jewish girl that would become known all over the world by her diary, was born in Germany on June 12 1929. Her parents decided to move to the Netherlands when Hitler came to power in 1933. Her father, Otto Frank, started a small business and Anne and her older sister Margot quickly adjusted to their new country. They lived in the southern part of Amsterdam in an area where a lot of middle-class, mostly secular, Jews lived.

Anne frank during the German occupation of The Netherlands

“Is discord going to show itself while we are still fighting, is the Jew once again worth less than another? Oh, it is sad, very sad, that once more, for the umpteenth time, the old truth is confirmed: "What one Christian does is his own responsibility, what one Jew does is thrown back at all Jews” The Diary of Anne Frank (1952)

The anti-Semitic policies of the Nazis in Germany proved that the family made a wise decision to move to the Netherlands. They lived in safety until 1940 when the Germans invaded and occupied the Netherlands. It did not take long before they started to implement anti-Semitic regulations. Anne and her sister were forced to go to a special Jewish school, and her father had to give up his ownership of his business.

“I was stunned. A call-up, everyone knows what that means. Visions of concentration camps and lonely cells raced through my head.” The Diary of Anne Frank (1952)

In 1942 the Germans started to round up the Jews and send them to concentration camps in Germany and Poland. Otto Frank understood what to do. He prepared a hiding place in his former office at the Prinsengracht: the secret annex, or in Dutch “Het Achterhuis”. The family went into hiding in July 1942.

The secret annex in the house where Anne Frank was hidden

“The Annex is an ideal place to hide in. It may be damp and lopsided, but there's probably not a more comfortable hiding place in all of Amsterdam. No, in all of Holland.” The Diary of Anne Frank (1952).

The family lived in the annex together with another Jewish family. Employees of father Frank supported them with food and clothes and other necessities. The two families lived under constant fear of betrayal and deportation and tensions between the eight fugitives hiding in the cramped annex could flare up every moment.

“Our many Jewish friends and acquaintances are being taken away in droves… transporting them in cattle cars to Westerbork, the big camp in Drenthe to which they're sending all the Jews. Miep told us about someone who'd managed to escape from there. It must be terrible in Westerbork.”
The Diary of Anne Frank (1952)

Most of the information about what was happening in the outside world, Anne received from Miep Gies. Miep Gies was a young employee of Anne’s father that risked her life by visiting the family. Miep became Anne’s closest friend and confidante. Her most intimate feelings however she only confided to the diary that her father had given her for her 13th birthday.

The betrayal of Anne Frank's family

“I keep my ideals, because in spite of everything I still believe that people are really good at heart.” The Diary of Anne Frank (1952)

On Friday, August 4, 1944 a SD officer and several Dutch policemen knocked at the door of the secret annex. The fugitives were betrayed. The family was taken to Westerbork, a concentration camp in the north-eastern part of the Netherlands. In Westerbork they waited for the inevitable: being transported to one of the death camps in Poland. On September 2 it was their turn. A horrible train trip in a crammed freight car that lasted for three days took them to Auschwitz. Of the eight people that were hiding in the secret annex, only father Otto Frank would survive the camps.

“I don't think of all the misery but of the beauty that still remains.” The Diary of Anne Frank (1952)

Anne, just turned 15 survived the first selection. Everybody younger than 15 was sent to the gas chambers. In Auschwitz Anne had to do hard labour under terrible circumstances, and she became weaker and weaker. In the beginning of 1945 she and her sister are transported to Bergen-Belsen. In Bergen-Belsen, not long before British troops liberated the camp, Anne succumbs to typhus.

The Diary of Anne Frank

Anne Frank’s diary was found on the floor of the annex by Miep Gies. She kept the diary until the end of the war, waiting for Anne to return. When it became clear that Anne would not return, Miep Gies gave the diary to Otto Frank. The diary was first published in 1947. Translations in all major languages followed. The diary became known by the wider public by the play “The Diary of Anne Frank” and the movie of 1959.

Other places of interest

Merwedeplein 37. The flat where the family Frank lived until they went into hiding. The flat is not open for visitors, but there is a small statue of Anne at the square. The flat were Anne lived is now offered to writers that do not have the opportunity to work freely in their home country.

This concentration camp where Anne was interned until she was sent to Auschwitz is now a moving museum and memorial. Address: Herinneringscentrum Kamp Westerbork
Oosthalen 8, 9414 TG Hooghalen The Netherlands
www.westerbork.nl