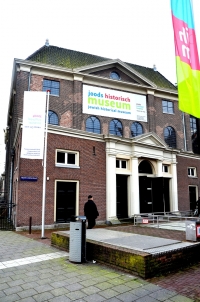 Jewish population, its culture and religion was since the beginning of the 17th Century an important element of life in Amsterdam. Several countries in Europe guided by the Catholic Church introduced starting from the 13th C. laws aiming at expulsion of the Jews. During the counter-reformation in 16th C. persecutions of Jews still increased. While the subject to many restrictions, Jews were permitted to settle in Amsterdam and peacefully observe their religion. The boundaries of Jewish life in the city were clear and not all of the limitations were strictly observed.

When Nazi Germany invaded the Netherlands in 1940, there were 60,000 Jews living in Amsterdam - approximately 10% of the city population. Throughout the years of German occupation not many survived. Almost all were deported and exterminated in Nazi concentration camps. Many went into hiding like Anne Frank and her family, who less than a year before the end war was betrayed to the Nazis by a never identified Dutch collaborator. After the war ended only 5,000 Jews returned to Amsterdam and the life of the city changed for ever. Today Jewish Amsterdam community numbers 20,000 persons, is well organized, has a rich religious and cultural life, nevertheless the old Jewish Amsterdam belongs to history.

A great way to learn about Jewish history in Amsterdam is from a knowledgeable personal guide. You can do so by booking this guided tour on Tiqets. It is a nice walk through the city with an interesting content.

While not much is left from the Jewish Quarter in Amsterdam, the magnificent Portuguese Synagogue constructed in 1675 has been left in its original state. The synagogue called also Esnoga or Snoge, has been saved from devastation during the Holocaust as Nazis intended to leave a trace of the vanished nation. Today, together with the nearby Jewish Historical Museum and the Holocaust Memorial at the Hollandsche Schouwburg these are the most important Jewish Monuments in Amsterdam, called together the Jewish Cultural Quarter. The modern Jewish life in Amsterdam concentrates in the South of the city (Amsterdam Zuid) and in the suburb areas of Buitenveldert and Amstelveen.

The museum was created from four adjoining Ashkenazi synagogues with the most important Great Synagogue (built in 1671) presents the history of Jewish life in the Netherlands, but is also an important Jewish cultural centre presenting contemporary art exhibitions and concerts. The Jewish Historical Children’s Museum at the same location, has a permanent exhibit and organizes activities promoting knowledge about Jewish life among children.

Jewish belief in life after death makes the cemeteries very important place because of respect due to people who are gone from this life. The most important is Zeeburg (est. 1714), where 200,000 people are buried. The oldest are a small historical cemetery of Sephardic Jews in a village on the Amsterdam outskirts Oudekerk aan de Amstel (est. 1614, located near the church) and Ashkenazi Jews cemetery in Muiderburg (est. 1642) with 40,000 graves, still active.

Amsterdam has a number of Jewish institutions located mostly in Buitenveldert. A Jewish newspaper in Dutch Nieuw Israelietisch Weekblad (Dutch: New Israelite Weekly or NIW, est. 1865) brings news brings news about the Jewish life across the world. There are also periodical Jewish broadcasts on radio and television (last Sunday of the month at 1:30 P.M., Nederland 1 TV Channel).

Amsterdam famous football club A.F.C. Ajax is proud to be the ‘Jewish club’, not because there are many Jews among the players, but because of traditionally tolerant attitude of its fans. During the World War II, when Jews were forbidden by the Nazis to perform any sports activities, the competition matches of Ajax were the only occasion for its Jewish Amsterdam fans to meet. The giant flag of Israel is often exhibited by the Ajax fans during the Dutch league matches.

Amsterdam has a number of kosher cafes, food stores, delis and restaurants. The Jewish Historical Museum cafe, accessible without a museum ticket is one of them, Sal Meijer’s Sandwich Shop (Scheldestraat 45, close to RAI) is a perfect lunch place, NasjViel (Lairessestraat 13) is a youth cafe and lunchroom.

Among the kosher restaurants we should list Ha Carmel (Amstelveenseweg 224), Golan Lunch & Dinner (Kastelenstraat 265), H’Baron (Kastelenstraat 110), Pizza & Co ( Kastelenstraat 105-A). Please note that the last three are located at the same street in the Jewish area of Amsterdam - Buitenveldert.

Jewish delicatessen have an established reputation for healthy and tasty food. The oldest in Amsterdam is Mouwes (est. 1803, Kastelenstraat 261) and there are others as Marcus Slagerij (Marcus Butchery) (Waalstraat 17), David’s Corner (Kastelenstraat 114), Zuurhandel de Leeuw (Vrijheidslaan 78) - all sell different sorts of kosher food.