Almost every week a cultural event or festival is held in Amsterdam. Many of these Amsterdam events and festivals have a long tradition and are carefully conserved by the Dutch. But these typical Dutch festivities are also very nice for tourists, because a lot of them are held with an English-speaking public in mind.

Booking airport transfer, attraction tickets or guided tours in advance is highly recommended whether you are visiting Amsterdam during a major event or not. Consider visiting this Amsterdam tickets website. Their large selection will make your wisit easier.

We also have a page about the less known activities. The recommendations are also divided by season and you can find them on our what to do in Amsterdam page.

Spring is a vibrant season in Amsterdam. For the King's birthday more than a million people travel to the city. Also, the festival season starts in this period and the first Amsterdam open air events are organized due to the better (however irregular) weather.

When you visit the city you will see that when the sun is out, the many terraces in the city fill up quick. Most of the bars and cafes offer fleece blankets to survive the still cold evenings.

The most important event each spring is Koningsdag (Kingsday). On the 27th of April the entire country is celebrating the King's Birthday. Many young people from all over the The Netherlands travel to Amsterdam, where the festivities last for two days. The citycenter of Amsterdam is closed for car traffic and the streets are filled with flee markets and street parties. Make sure to wear something orange.

On the 5th May the Dutch celebrate Bevrijdingsdag (Liberation day), which marks the end of WWII in The Netherlands. Large festivities are held in parks and on squares in the city. 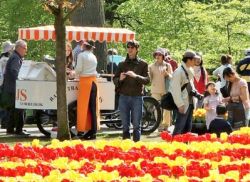 In summer the city of Amsterdam is packed with tourists from all over the world. Most Dutch leave the city, but because of the thousands of visitors, the city does not feel deserted at all.

Summer is the time of open air festivals, theatre and concerts. Probably the most attractive event in summer is the Grachtenfestival, which is held mid-August. It is a series of concerts and shows, culminating with a big concert at the Prinsengracht. The musicians play and sing on the especially built construction on the water and the members of audience arrive by boats. Visitors also listen from the canal banks and bridges nearby, because the water echoes the music.

Another spectacular festival is the annual Gay Pride, during which a carnival-like parade of boats sails through the canals to celebrate gay love and culture.

In the autumn Amsterdam is vibrating with cultural events: books and antique markets, concerts, film festivals and events in museums. Probably the most important of the autumn is IDFA, an International Documentary Film Festival starting in the middle of November, showing documentaries in cinemas all over town. Go see a documentary in the beautiful Tuschinski or in the modern Eye Film Institute in Amsterdam-Noord.

Museum Night is another attractive Amsterdam event that takes place in November. For one night most of the museums in Amsterdam open their doors for music, special exhibitions and food. Be sure to buy tickets on time, since the event is very popular amongst Amsterdammers.

Mid-November a traditional festivity for children starts with the arrival of Sinterklaas (Saint Nicholas). Every year there is a festive parade through the canals. Sinterklaas is the Dutch version of Santa Claus, bringing sweets and gifts to children. 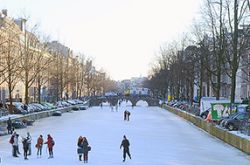 Winter is often not very cold in Amsterdam, due to the mild sea climate. The days with freezing temperatures are scarce, but when it happens and the canals freeze, the view of people all ages skating on ice is beautiful. There are also pop-up skating rings on the Leidseplein and the Museumplein.

While its cold outside and the days are short it is the best time to visit some of the museums, go to a concert in the Concertgebouw or go see a movie in the cinema. The museums and other tourist attractions are less crowded in the winter.

In the evening you should definitely go see the Amsterdam Light Festival event. You can walk the tour through the citycenter or take a canal cruise.

December hosts three important holidays: New Year's Eve, Christmas and Sinterklaas, the Dutch version of Santa Claus. Fun fact: the Dutch don't give each other presents during Christmas, but during Sinterklaas at the 5th of December. According to the tradition Sinterklaas leaves a big bag of presents in front of everyone's door.

Winter is the most quiet of the seasons except for the New Year Eve Amsterdam events and celebrations at the Dam square and the Prinsengracht. Large crowds celebrate the start of new year with champagne, music and fireworks.

Amsterdam has two official tourist offices. One at Amsterdam Schiphol Airport and one in front of the Central Station in an old style wooden house called Noord-Zuid Hollandsch Koffiehuis (North-South Dutch Coffee House). These offices inform about the city in a professional way usually handing you free small maps and informational folders.

A holiday can add an interesting and festive note to your trip, particularly if it involves a parade or special happening somewhere in the country. In the Netherlands, expect banks, shops, and most museums to be closed, and public transportation to operate on limited schedules.

Below you can find the most popular Amsterdam events with a short general description. It is good for choosing an event without going through too much information. Their websites are listed there too for more details.