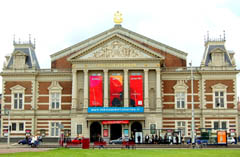 The famous Amsterdam Philharmonics is called Concertgebouw (translation: Concert Building). It closes the Museumplein from the south-west, facing the Rijksmuseum. The classicist 19 c. building has today a modern annex, with more space for the booking office, cashiers and the reception of the audience. Concertgebouw serves as home to the famous The Royal Concertgebouw Orchestra, as well as The Dutch Philharmonic Orchestra and The Dutch Chamber Orchestra.

You may buy the tickets for Concertgebouw tour and they will be sent to your e-mail.

Concertgebouw big concert hall – Grote Zaal, is internationally recognized for its exceptional acoustics. The whole building has been completed in 1886, but it had been opened only two years later, when its orchestra conducted by Henri Viotta gave its first concert, on Wednesday 11 April 1888. Since then, the building and the Concertgebouw Orchestra have an uninterrupted reputation among music lovers as of one of the best in the world. The Concertgebouw building received an additional, modern wing and has been thoroughly restored in the years 1982-1995, without an interruption of its concert activity.

Concertgebouw gives multiple series of classical music concerts with the yearly attendance of more than 800 000 spectators, making it second most popular concert hall in the whole world (after the music complex Parco della Musica in Rome). In total 445 concerts are held each year in the big hall of the philharmonic (Grote Zaal) and 390 in the small hall (Kleine Zaal). Apart from the classical music concerts, jazz and pop shows are held in Concertgebouw, as well as special events - congresses and festive social occasions.

A truly admirable Amsterdam symphonic ensemble has received the title of the Royal Orchestra (Koniklijk Concertgebouworkest) from the Dutch Queen on its 100 years anniversary in 1988. The orchestra usually gives 120 concerts a year, a large part of it abroad. It is presently led by a Latvian conductor Mariss Jansons (born 1943). Initially contracted in 2004 for three seasons, Jansons remains orchestra’s Chief Conductor.

Classical music concerts at Concertgebouw are organized in several traditional series. Apart from traditional Royal Concertgebouw Orchestra evening concerts there are also Robeco Summer Concerts series with visiting soloists and orchestras, Sunday Morning Concerts and Saturday Matinee Concerts which are also broadcasted on the radio in the Netherlands, Wednesday Lunch Concerts as well as many other concerts by different orchestra’s Dutch and foreign. Famous piano soloists are presented in Riaskoff Master Pianists presenting names like Alfred Brendel, Krystian Zimmermann, Radu Lupu and Maurizio Pollini. New Masters on Tour presents young musicians from the Netherlands and other countries.

Apart from the classical music the accent is on the Music of the World – exotic music from other countries, however Concertgebouw happens to be also the stage to the more artistically ambitioned jazz and pop events.

Doors of the concert hall open 40 minutes before the concert. Latecomers may be admitted to the auditorium only by the Concertgebouw staff, during the first pause in the concert. It is forbidden to film or record any part of the concert. Smoking is allowed only in smoking parlors. Large bags, luggage, parcels and umbrellas must be left at the coatroom.

Before all Sunday Morning Concerts you may visit the philharmonic building, also behind the scenes, on a guided tour (September-June; at 9:30am; in Dutch, English translation is possible). In July and August, there are tours at the Robeco Summer Concerts (They start at 6:30pm).

Every Wednesday afternoon, an entry to a lunch concert is free. It starts at 12.30 p.m. (September – June only).

Concertgebouw in Amsterdam on the map