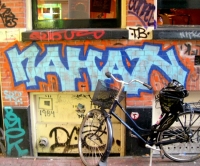 Amsterdam has a rich, so called street art scene, where graffiti plays an important role. Much of this young people activity is closely connected to some sorts of music as hip hop, a few sport disciplines as skating and BMX biking, selected video games and a specific fashion. Groups of graffiti artists call themselves crews. Amsterdam crews like USA (United Street Artists), TMP, 3rd Eye or LF (The Lame Face) exist now for about fifteen years.

Graffiti artists used to call themselves writers or bombers. "Putting shit" - as they themselves call it, or in our language painting graffiti, happens mostly at night. This is because of the regulations, which are very simple – a graffiti artist has to pay for the damage done by the painting. Since the basic cost of a simple graffiti cleaning is € 150,- ($ 220,-) per square meter, whilst cleaning of the bigger stone surface of the wall may go into hundreds of thousands of euros, only some very small graffiti are actually affordable. When caught, graffiti artists are usually arrested for one night, but they can be kept in detention up to three days and six hours. Judges are lenient only at the first apprehension, usually giving an offender a small fine for vandalism and a cleaning task. When caught for the second time, you may end up in jail and pay a big penalty for the damages. That is why many of the graffiti cases end up in a settlement, where graffiti artists pay for and cooperate in removal of the paintings, with 10% paid of the damages paid to the court. No wonder most of the graffiti appear on houses doors, gates and fences – these are the most unproblematic places to renovate.

The Dutch approach to graffiti and vandalism

Amsterdam municipality has an interesting approach towards the graffiti artists, trying to decriminalize the whole activity by creating legal opportunities and places to paint, by promoting the most interesting graffiti painters to the status of an artist accepted by the society, by sponsoring them, giving them commissions to decorate, trying to convince them to move with their painting to canvas, promoting exhibitions and finally purchasing most interesting works to the museums. Last years several museums of reputation as Noord Brabantsmuseum in s’Hertogenbosch and Kröller-Müller Museum in Otterlo have exhibited graffiti.

Despite the already mentioned official graffiti activities, the painter’s circles remain largely informal. Some of the artists have their personal websites but if you are a graffiti artist yourself and you would like to get in touch with the people from these circles in Amsterdam, the best way is to visit Henxs Henxs, a small shop with spray paints, and a protection gear of two kinds – masks which you should use not to breath dust of the paint, and balaclavas you ought to wear not to be easily recognized by the police on the CCT security cameras.

You may get the cheapest spray paints with high content of pigment in tens of different colors, directly at a specialized stand on the Waterlooplein market, at € 3,- per bomb.

Mayor of Amsterdam about graffiti

To close we should quote the city mayor. In April of 2007, Amsterdam mayor Job Cohen took part in painting of a huge graffiti, during an event organized by the municipality. As he noticeably was very good at spraying the paint, Cohen has been asked by a known graffiti artist Faith71, if he had learnt it going out at night, on a trail to paint. The mayor’s answer has been: - I am not going utter a word about it.