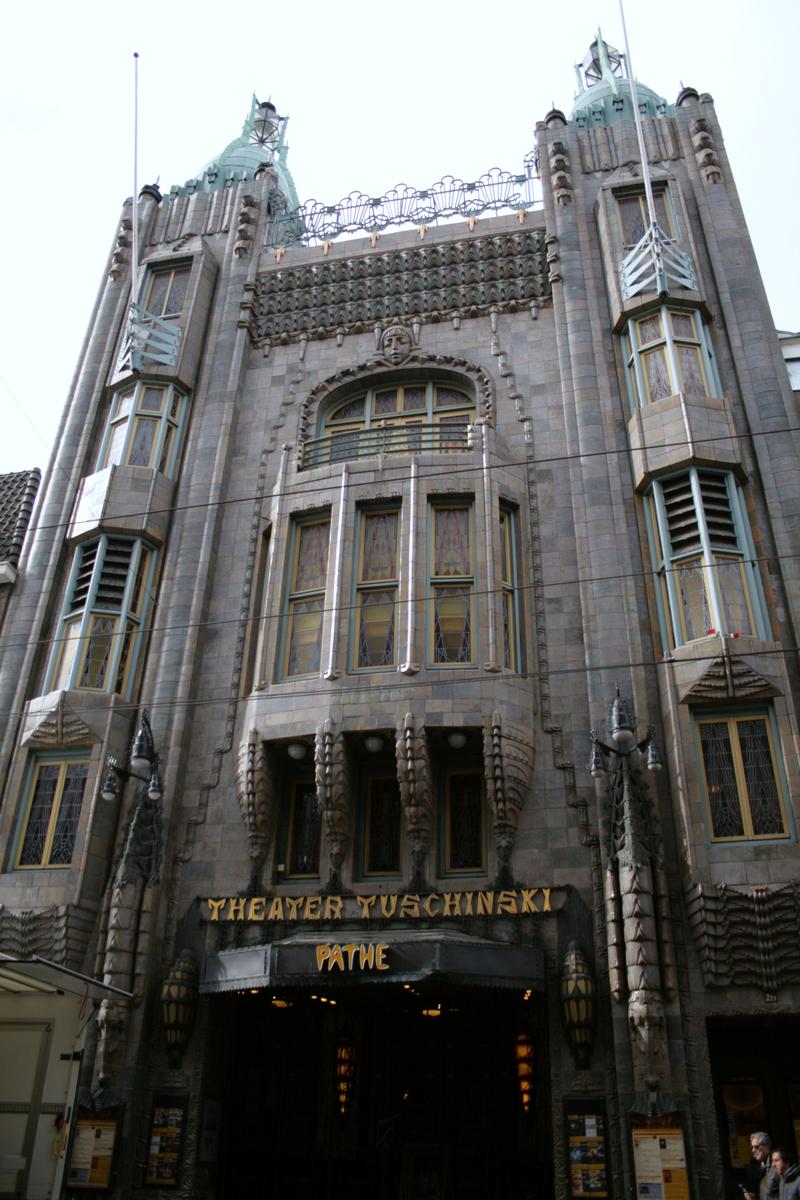 Tuschinski is a huge, Art Deco cinema palace conveniently located between the Munt tower and the Rembrandtplein. Walking in the area of the flower market, you may see two towers of Tuschinski rising above other buildings. Built by the immigrant from Poland Abraham Icek Tuschinski, the cinema opened in 1921 and it remains until today with its Art Deco interior one of the most cherished buildings in Amsterdam. Tuschinski has been thoroughly modernized and is today one of the release cinemas in the city.

History of the Tuschinski cinema

Abraham Icek Tuschinski (1898-1942) arrived to Rotterdam from Poland at the beginning of the 20c. The legend says he was just a poor, self-taught Jewish tailor aiming for America. Cinema was a new craze then and Tuschinski in a short period managed to open four cinemas in Rotterdam. In 1917, Tuschinski moved with his brothers in law, Gerschtanowitz and Ehrlich to Amsterdam, and a year later began the construction of the big cinema in Amsterdam at the cost of 4 million guilders, using according to his own words the best people, best ideas and best materials he could get.

The original project of the new cinema has been made by a young and later somehow unrecognized architect Hijman Louis de Jong and is a mixture of Art Deco with the style of the Dutch Amsterdam School in architecture, and Abraham Tuschinski's own taste. The architect could not to finish the building, Tuschinski fired him before the end of the construction, and two other architects were to complete the interiors.

The cinema has been designed as an imposing building, with a big entry, an imposing Art Deco façade and two towers on both sides, rising above the neighborhood. The interiors, designed by Pieter den Besten and Jaap Gidding were very Art Deco, with strong Jugendstil influences, just as the investor wanted it to have. The main foyer was imposing, plush, somber, lit by big yellow Art Deco lamps. The walls are from covered by carvings in dark wood, glazed tiles and bronze elements.

The huge main Tuschinski auditorium had an allure of an opera, with two big balconies one above the other, hanging above the audience. It had originally 1200 seats. In the side rooms, a cabaret named La Gaité, a Japanese tea room, a Moorish suite were located. Several smaller suites on higher floors were built. An elegant lift was taking the guests upstairs. The corridors of Tuschinski were built were not only to connect the various auditoria. Their labyrinth was meant to offer its guest the privacy. The cinema had a modern ventilation and heating system maintaining the same temperature throughout the whole building. In 1936, the cinema has been thoroughly renovated. The beautiful 2-inch thick woolen carpet in striking colors dates from this time.

During the German occupation 1940-1945, Abraham Tuschinski and nearly his entire family were murdered in the Nazi concentration camps. The cinema could not bear his patron's Polish-Jewish name – it has been renamed to "Tivoli". After the war, Tuschinski returned to its glory.

Tuschinski as a stage

Tuschinski's main hall has a wide stage with large cinema organ Wurlitzer-Strunk installed there in 1940, replacing an earlier Wurlitzer model 160. Previously Tuschinski had also a resident 16 instruments orchestra and presented stage shows with famous singers and musicians. Maurice Chevalier, Judy Garland, Marlene Dietrich, Edith Piaf, Dizzy Gillespie, Fats Domino, Dionne Warwick - all of them had concerts in this auditorium. The resident orchestra was disbanded in 1969 and the organ ceased to play before the movies in 1974.

The old cinema needed renovation. First in 1984, the whole cinema carpet has been redone using the original thread in Morocco. Somehow, despite having the identical colours and the original thread, the carpet’s patterns have been lost. Still the effort was enormous. The carpet for the main foyer was 50m long and had to flown in one piece to Amsterdam by a KLM plane. KLM covered the cost of this cargo (more than $ 100.000). In 1998-2002 Tuschinski has been thoroughly rebuilt with the aim to restore it as a historical monument. The old original mural has been discovered and the painstaking restoration of the interiors performed. At the back of the old cinema, a modern annex has added with three more screens. The technical equipment of the cinema has been modernized.

Today, the Tuschinski cinema belongs to the big distributor Pathé. It has three screening rooms in its old part and three in its new wing. The nearby newly built Pathé Munt cinema has additional 12 screens.
The main auditorium of Tuschinski audience has been reduced to 740 sets including love seats and private boxes. You may order wine and small meals to your private box. The Tuschinski's auditoria are also available for special events, concerts, and weddings. All red carpet premieres in Amsterdam take place at Tuschinski with stretched limousines bringing celebrities to its front among the crowd of the cinema by the movie lovers.

Pathé Tuschinski Cinema in Amsterdam on the map