The history of Concertgebouw in Amsterdam 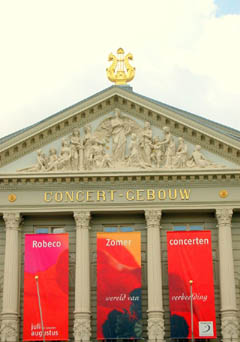 Amsterdam famous philharmonic building was built as a consequence of an initiative of six prominent city citizens who on 5 of September 1881 established a public company, to finance its construction. They first bought the parcel of land in the city (in 1883) situated in front of the Rijksmuseum (then in construction), and upon the issue of the stock papers to assemble more funds, hired an architect to make a project. Finally in 1886, the construction of the Concertgebouw was completed. Although the building has been intensively reconstructed and changed throughout 1980 and 1990-ties, its initial plan never changed.

An Amsterdam architect Adolf Leonard van Gendt (1835-1901, designed along other buildings a lovely Hollandsche Manege and worked in a team building the Central Station), in his project of the of the philharmonics followed the design of another concert hall - built two years in Leipzig’s Musikviertel - Neue Gewandhaus (the second), which at the time became renowned in Europe for its acoustics. Concertgebouw received a similar plan to the Leipzig building - a rectangular Grote Zaal – big hall with all corners rounded and wide corridors around, as well as Kleine Zaal – a small hall behind, but positioned crosswise. Designing the outside of the building, van Gendt followed ideas of the Dutch Neo-Renaissance adding to it a classicist, monumental façade with gilded decorations and golden Apollo’s lyre at the top of the decorative tympanum.

Concertgebouw was constructed on 2186 wooden piles stuck in an uncertain Amsterdam soil, with layers of mud and sand. Its big hall has dimensions 44 x 27, 8 x 17,5 meter. It is surrounded by 2,7 meters wide corridors. First concert took place in 1888, and ever since the big hall of the Concertgebouw has amazed audience with its acoustics.

The Concertgebouw renewal at the end of the 20c.

When hundred years of Concertgebouw approached, citizens of Amsterdam felt the need of transformation of its beloved concert hall. Despite the progress the acoustical engineering made throughout the 20 c., musical acoustics still have vast grey areas, with important subjective factors in their evaluation. Many advised against loosing so wonderful acoustically hall as Concertgebouw’s Grote Zaal.

Coincidently, the remaining ruins of the Gewandhaus in Leipzig (previously burnt in the Allied bombings of 1943/1944) in spite of public outcry, have been pull down by communist authorities - on March 29, 1968, to give place to a much larger modern (and awful) building (completed in 1981).

Even now, there were voices in Amsterdam, that instead of costly restoration it would have been cheaper and better to demolish Concertgebouw and build a modern building. 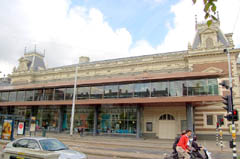 Finally, the Dutch in spite of everything decided to add a new wing to Concertgebouw. Today, even if we are disappointed with the actual finish of this glass, steel and stone construction added on a side to the Concertgebouw building, we must admire its intelligence. The main problems before this addition, was lack of space to service the arriving members of the audience. It the past they would often arrive in their carriages and leave their coats there. Also the coffee bar space has been earlier not necessary, as drinks were served inside the hall.

The architect Pi de Bruijn (born 1942) argued against locating the necessary new service spaces underground, as not convenient for the public which would have to walk a lot on stairs up and down. He proposed an annex to the building - essentially a promenade covered with glass integrating inside with the rest of the building but on the outside clearly contrasting it. Still the intrusion in the original building was minimal, because of the new wing transparency and relatively small volume. Both concert halls, with their unique acoustics, were kept intact.

Restoration of the Concertgebouw building

During the 1990-ties, the thorough restoration of Concertgebouw has been executed. Building’s foundations were redone, placing 10 000 ton construction on 400 metal pipes filled later with concrete. Concert hall huge organ (originally built by Utrecht organ-builder Michael Maarschalkerweerd) after almost hundred years of service, has been taken apart, restored and modernized (by Flentrop Orgelbouw from Zaandam).

The whole Concertgebouw interior has been renovated, as well as the outside of the building. The buildings front decorations with the big proud letters Concert-gebouw have been gilded and the new golden lyre, which in the past hundred years has become the symbol of the Concertgebouw, yet again has been placed on the top of its façade.