The Dutch are great music lovers. In older times, before the era of Internet and television, hundreds of thousands of Dutch people would every week meet and sing in local choirs. Globalization and new media changed the lifestyles of people in the Netherlands as in any other country, but the Dutch could not live without music. It is not by accident, that Dutch electronic giant Philips (together with Sony) developed a musical CD and a digital way of recording music. Nevertheless, as everywhere else, the live music concerts are what music enthusiasts in Holland value most.

Amsterdam has various concerts of classical music every week. The most notable is Amsterdam philharmonic – Concertgebouw, with one of the best symphonic orchestras in the world – the Royal Concertgebouw Orchestra. A new concert hall is called Muziekgebouw aan ’t IJ. Furthermore there are often classical concerts held in Beurs van Berlage, Carré and the RAI hall. Several concerts take also place in churches, with permanent organ concert series in Oude Kerk. Sometimes, typically Dutch concerts on the water - with orchestras and audience on ships and boats, as Aqua Musica or Pulitzer Concerts have been organized.

As every major city Amsterdam hosts many important pop and rock stars. All new trends in popular music are also represented. Most of the big concerts are held in Amsterdam ArenA. Other concerts venues include Westerpark, Java Eiland, AFAS Live and clubs like Paradiso and Melkweg.

Jazz concerts attract large audiences – especially during the North Sea Festival, an important annual jazz event taking place each summer in Amsterdam, with concerts in Bimhuis - Amsterdam concert hall specialized in jazz and improvised music, which offers more than 300 concerts each year. Live jazz may be also enjoyed in many jazz Amsterdam clubs and cafés – Maloe-Melo (blues), Panama (latin) and Brix (vocal) are not to be missed.

Amsterdam has many discos and clubs, where live and recorded music accompany the dancing crowd. Dutch DJ’s as Tiësto, Armin van Buren or Berlin based Paul van Dijk are widely known in Europe, with their recordings climbing into the Billboard charts in the US. The most known clubs in Amsterdam are Melkweg, Paradiso, Escape, Chemistry, Dansen bij Jansen (only for students).

Amsterdam has often free public concerts in open air spaces – in the parks and squares. Holidays time as Queen’s day or Christmas time are an occasion for these musical events of all kinds. Amsterdam new Central Public Library (Centrale Bibliotheek) located near the Central Station, often gives free recitals of jazz musicians and piano music. Museumplein is a regular location of free mass concerts for the youth. 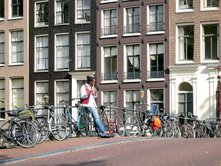 Walking in the street of the old city, you will often see the street musicians, small bands or even small orchestras. Public holidays always fill Amsterdam with music – the whole bands are moving on boats along the canals or playing in the city parks and squares. Vondelpark during the weekend and Leidseplein in the evenings are the venue for many of these concerts.

For music festivals please see our list of annual events. You will find there shows of all possible musical genres – both classical en entertaining.