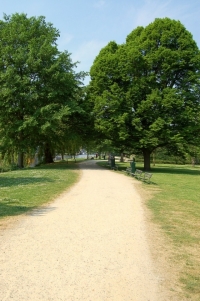 This big green area with a theater, a cinema, an exhibition space and an events stage, bears the proud name of Culture Park Western Gas Factory (Cultuurpark Westergasfabriek). What originally was a small 19th century neighborhood park, has been united with the vast area of the defunct municipal gas installations.

The original park has been established in 1891. It served this quiet, working class area of Amsterdam, which bears the same name – Westerpark. Located behind the park was a gas factory built in 1883 by British Imperial Continental Gas Association. Both – the park and the factory were located at the straight road leading to Harlem – Haarlemmerweg.

It all started to change in 1960’s. Resources of the natural gas had been found in the North Sea. The gas factory became obsolete. Since then its buildings were used only for storage, or just stood empty. At the same time a strong anarchic movement of youth squatters (Dutch: krakers) by occupying some of the buildings saved them from demolition. The aesthetical values also changed - the old city installations started to look original, their architecture began to be valued. In 1989 old red brick buildings received the status of industrial monuments. The whole area of the municipal gas and water installations has been remodeled, trees planted and in 2003 Westergasfabriek has been opened to the public. 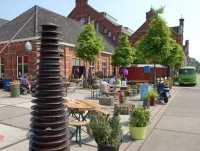 The municipal large building divides two parts of the park – old one and new - that of the former gas factory. It is not much of the park yet, more a vast space with an art house cinema (Het Ketelhuis) two good cafés full of young people, many offices of starting up designers and fashion designers. At the back of Westergasfabriek there is a long rectangular pool for kids, perfect on a warm day.

While the old Westerpark feels like a regular small park with a few bronze sculptures and lots of green, the newly added Westergasfabriek is more of an experimental suburbia. Young public and an avant-garde atmosphere. Certainly interesting, when you have a particular event in mind.

How to get to Westerpark in Amsterdam

By foot: from the Dam square along the main shopping street to the West (left from the square if you stand with your back to the Palace) which will turn and change names, but eventually will live you to a small square called Harlemmerplein. Cross the bridge behind the square and you will see Westerpark on your right.
By tram: line 10, exit on a stop Van Hallstraat. You will find the Westergasfabriek behind Harlemmerweg – a busy street behind you.
By bus: from Central Station Bus 21, exit on Harlemmerweg, stop Van Hallstraat.
By car: take exit S 103 from the ring A10 West, then take right and follow the signs to Amsterdam Centre. You will see the Westergasfabriek on your left, on other side of the canal. If you arrive on the ring from the North you will have to take an exit s104, direct yourself to the city centre. As you see Westerpark on your right, turn right into the Harlemmerweg. There is a parking possibility on the Westergasfabriek grounds (you will have to cross the canal through the old iron bridge).

Westerpark in Amsterdam on the map