There is a National Windmill Day (11 May). And on festive occasions or national holidays, molens are decked out in flowers, garlands, figures of angels or the Dutch flag.

There is a beautiful windmills day trip from Amsterdam. You can read more about it on our Zaanse-Schans tour page.

And if you want to spent a nice afternoon on a bike in the countryside of Amsterdam, join the Countryside Bike Tour, that will bring you to an authentic windmill, among other things.

For centuries, windmills have helped the Dutch fight water. And also saw trees into planks and beams. Which was important for shipbuilding since the Dutch were a large naval power at that time. In the glory days, the Netherlands had more than 10,000 windmills and today around 1,000 still stand. Many of the remaining mills are open to the public and a couple have even been transformed into homes.

The word polder derives from an old Dutch word "polre". It is an area of dry land that has been reclaimed from sea or marshes.

The ground level of polders subsides over time and has to be separated from the surrounding higher water levels by dikes. However water still enters the polder through infiltration of groundwater, rainfall, or wawter from nearby rivers and canals. This means that it has to be continuously drained by pumps and drained by opening sluices at low tide.

Netherlands has as much as 20% of its land reclaimed from the sea.

Contrary to popular belief, you don't even have to leave Amsterdam to see this little piece of Dutch heritage up close. Like most things in a multidimensional city, everything is literally at your doorstep or just a short bike ride away.

There are in fact 8 windmills in Amsterdam. This may come as surprise even to the locals. 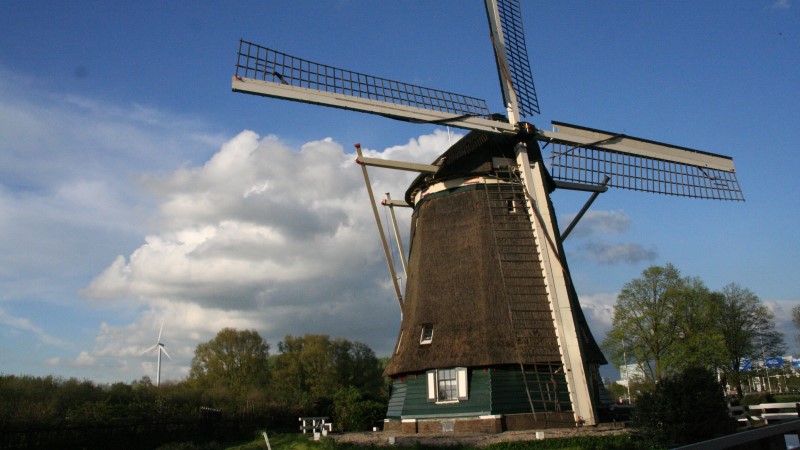 Address: Haarlemmerweg 701
Not open to public

Constructed around the year 1632 and used to drain a polder to the west of Amsterdam city. The windmill was attached to a screw water pump. After 1950's it lost its function because the surrounding area was all built up.

It is now situated on a small piece of land between apartment buildings and a highway. The windmill is still functional and turns if there is enough wind. But nearby buildings obstruct the optimal wind flow. 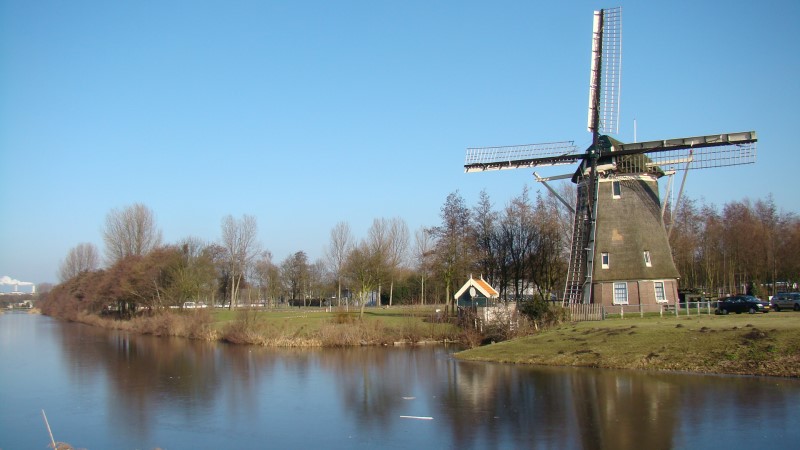 Just like the 1200 roe windmill, it was also used to drain a polder in that area using a screw pump. It was renovated in 1757 and functioned until 1951. By that time the polders in this area were covered with sand and buildings were erected there. This was serving the expansion of Amsterdam city under the Western Garden Cities expansion program.

It was decomissioned in 1940 and moved to its current location in 1965. Now it is used to drain water from the sports park Ookmeer. This windmill is now also known as De Ookmeermolen. 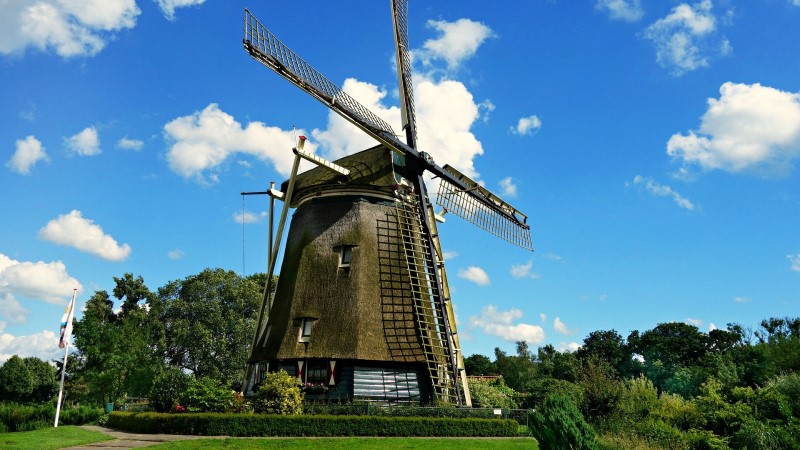 Constructed in 1636 as a drainage mill for the Riekerpolder in the village of Sloten. Its function has been taken over by an electric pumping station in 1932. And in 1956 the windmill was dismanteled because of sand extraction mine at its location. And the enlargement of the Nieuwe Meer. In 1961 it was rebuilt on the Amstel river.

The windage has decreased since then as a result of buildings and forests that have been created nearby. Hewever the windmill is still used for water pumping if the wind is favourable. Usually on Saturdays and Sundays between 12:00 and 17:00 from May to September. 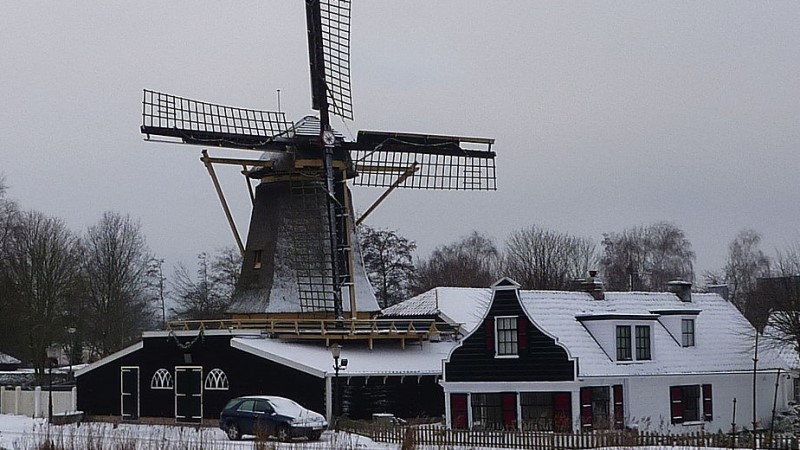 Constructed in 1792 for milling chalk and truss. Chalk was used in paint and putty. Trass is a ground volcanic stone used as a component of mortar. It has undergone restoration in 1967 and 1990 and now there is even a place for special gatherings in it. It is the last surviving windmill of this type.

This windmill is publicly open every 2nd Saturday of the month. There is a small exhibition between 10:00 and 15:00. If there is enough wind, the windmill will turn. Sometimes there are also volunteers who can give a tour. The entrance is free. 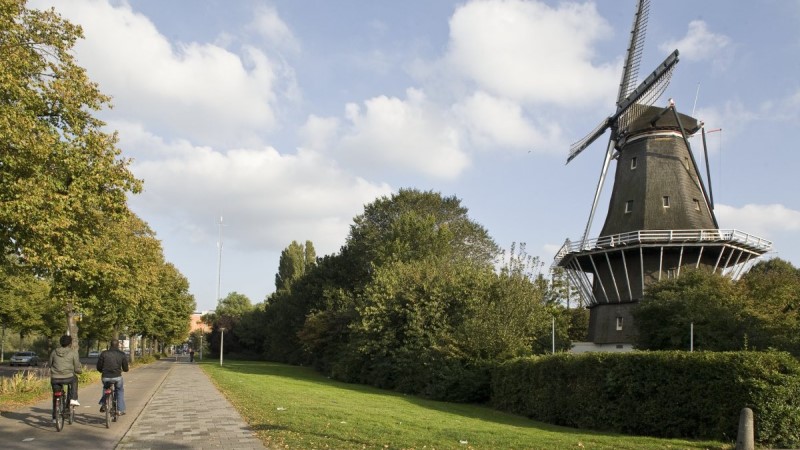 Constructed in 1768 as a flour mill near the Singelgracht. But in 1877 it has been dismantled because of the construction of Marnixstraat and rebuilt at its present location. At the new location it has been build on 4m high stone foundation and in 1930's it was modernized with electric machinery so that it can be used also when there is no wind. It was used until 1960 (mostly powered by electricity). Since then there was a catering facility, spice trade and even some fire damage.

Now it is open to the public only during National Windmill Days which are the second Saturday and Sunday of May. 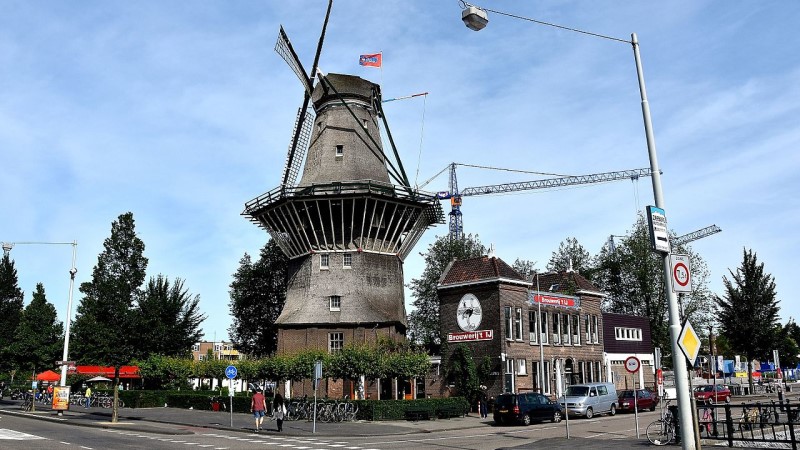 Address: Funenkade 5
Not open to public

Cornstucted around the year 1725 as a flour mill. In 1814 it was moved to its current location because of the construction of a new barracks at its original location. 1843 it has been modernised with a gas engine which enabled milling until the end of 1920's even though the windmill was no functioning since the beginning of that decade. After the restoration in 1930 and the installing of new blades the grinding continued until the 1940's. Notably during the WW2 because of lack of power. In 1976 the windmill had to be restored again because of a strong storm.

Now, even though its blades turn, they are not connected to the milling mechanism. Of all of the 8 mills, this is probably the easiest oe to get to as it is within walking distance of the Maritime museum. 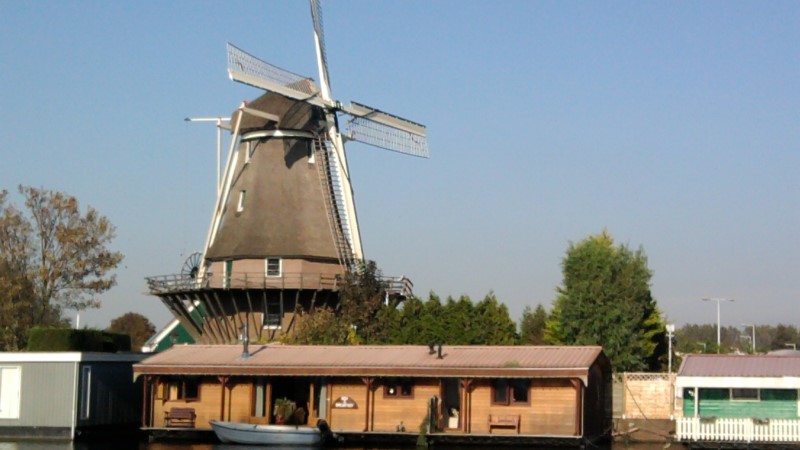 The original Sloten mill (Riekermolen) was moved to a new location in 1956.

This is a new mill that was constructed in 1990 from a new brick foundation, an octagonal house from another windmill originally dated from 1847 and new wind blades. That 1847 mill was disfunctioned as a polder drainage mill in 1878. And used as a house for nearly 100 years. Then it was rebuilt as a windmill again in 1990 in Sloten. And repaired and repainted again in 2010. It is now functional and crewed and performs drainage almost every day.

The only windmill in Amsterdam that is open to the public every day except holidays. Open between 10:00 and 16:00. The lower part shows the workings of a polder drainage windmill and the upper room has an exhibition on the life of Rembrandt. The house near the mill has been converted into a cooperage museum. 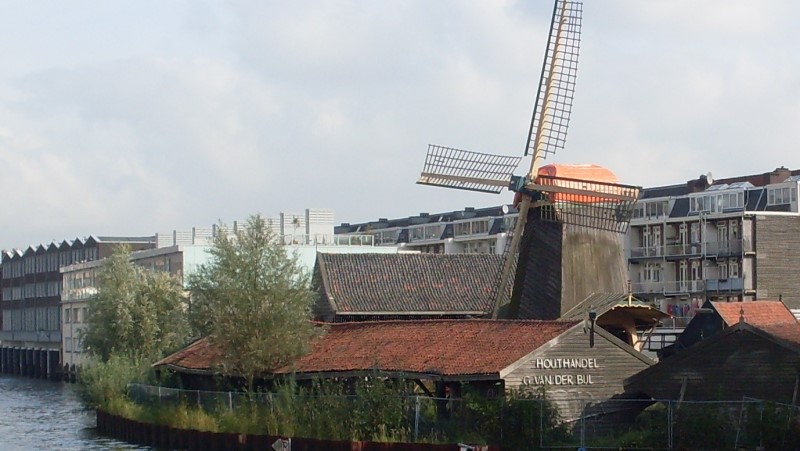 Address: Gillis van Ledenberchstraat 78A
Not open to public

Built in 1631 as one of a group of 12 wind sawmills on the outskirts of Amsterdam. But most of those fell as a victim to Amsterdam's city expansion during the following centuries. In 1928 De Otter was dismantled and served as a warehouse. In 1977 it was placed on a monument list and was restored in 1996. But since then it is constantly threatend by other building developments and it is without usable wind anyway now because of the same reason. There are plans to move it to the municipality of Uitgeest, however a compromise between all parties involved is hard to achieve.

The mill is approximately 20 minutes away from Dam Square by foot. West of the Jordaan district. De Otter is a post mill (paltrok) and not only is it the only wood sawing mill of its kind still in operation, but it is also the oldest.

Photos (all images have been cropped):