The Jordaan is a district in the citycenter of Amsterdam, known for its beautiful houses, nice restaurants and original shops. When in Amsterdam, it is a must to stroll through the little streets and canals. On the many bridges over the canals, you can take beautiful pictures and see why Amsterdam is called the Venice of the North. Popular streets in the Jordaan are the Prinsengracht, the Westerstraat, Haarlemmerstraat and the '9 straatjes' (nine little streets).

And if you want to enjoy the atmosphere of Jordaan to the fullest pick from this list of
hotels in Jordaan.

History of the Jordaan 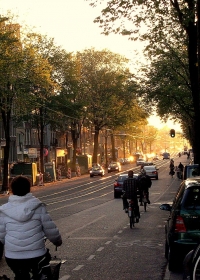 The Jordaan was built in the early 17th century to house working class and immigrants. A large stream of refugees from France, England, Spain, Portugal and other countries came to Amsterdam in the 17th and 18th century, seeking freedom. Amsterdam was known for its tolerance towards other political and religious beliefs.

The Jordaan was originally a poor district, with small houses and many inhabitants. Around 1900 the population was estimated around 80.000. Imagine all those large families stuffed in the small houses the Jordaan is known for. Combine that with the lack of sewerage and no running water and the chaos is complete. Nowadays about 20.000 people live in the Jordaan.

The name of the district, Jordaan, is supposed to come from the French word for garden: Jardin. Many streets in this area are named after plants and flowers. However, others say it is named after the Jordan-river, because of the many Jews that fled to Amsterdam and lived in the area. 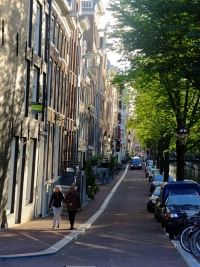 In the 19th century the Jordaan started to decay because of the growth of the population and the lack of maintenance. This decay continued until the beginning of the 20th century.

In the 20th century the Jordaan was still an area for immigrants and poor people. Around 1920's the living conditions in the Jordaan improved because of better hygiene and healthcare, however the conditions were still not good. In the thirties the sewerage was installed, this was a big improvement for the neighborhood.

During the 1970's the city council had serious plans to demolish big parts of the Jordaan and replace them with modern blocks of flats. The entire area was decayed and rebuilding it was a cheaper option than renovating. However, there were many protests against these plans. Because of the large resistance the plans changed. Monuments Care would lead small projects that would fix up the neighborhood, while protecting its historical character.

At the end of the 20th century the Jordaan was discovered by large groups of artists, students and young professionals. The old inhabitants moved to other districts in Amsterdam, or to other cities like Almere.

Nowadays the population of the Jordaan is a mix between original inhabitants and young professionals. However the area becomes more and more expensive to live in, forcing the working class to move to other areas or cities.

In the Jordaan you can visit different types of markets. Every Monday till 13:00 there is a flea market at the Noordermarkt. It is the perfect place to buy old-fashioned Dutch plates, pots and linen. There are also many stalls selling clothes and leather accessories. To find the best treasures, make sure you are early!

For food you can go to the Lindenmarkt at the Lindengracht on Saturdays, or to the market on the Westerstraat on Mondays. Every Saturday there is a biological food market at the Noordermarkt. 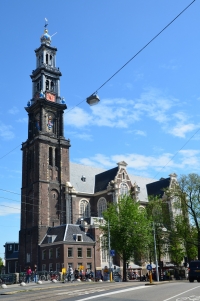 You can visit the Pianola Museum with old mechanical pianos, a museum of the writer Theo Thijssen and a Fluorescent Light Museum called Electric Lady Land. If you want to learn more about the Jordaan you can visit the new Jordaan Museum that is dedicated to the history of the quarter.

In the Netherlands, and especially in Amsterdam, there is a tradition of living on the water. These houseboats are called 'woonboten'. Many of the boats don't have sewerage. You can imagine that the canals aren't very clean and are not suitable for a swim. If you want to learn more about these houseboats you can visit the Houseboat Museum.

On the border of the Jordaan you can find the Anne Frank House. This museum is situated at the Prinsengracht and is very popular. It is advised to book tickets in advance (which you can do through our site). 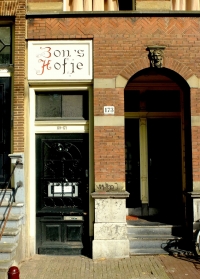 In the Jordaan you can find many 'hofjes', best translated as inner courtyards. These were built centuries ago, to house single women or house staff whom were too old to work. Because of Monuments Care, these beautiful houses and courtyards can still be visited.

Nowadays there are still 19 'hofjes'. The oldest one is the Sint Andrieshofje at the Egelantiersgracht. Other well-known courtyards are the Huiszittenweduwenhof and Hofje de Zeven Keurvorsten. Not all 'hofjes' are open to visitors. However, in summer you can visit many during free concerts, known as the 'Hofjesconcerts'.

Another historical leftover to look out for are the stone tablets on the houses in the Jordaan. These signs show the profession or family sign of the original inhabitants. For instance a butcher had a pig on his tablet and a baker a loaf of bread.

Against the backdrop of poverty, dirt and hard work a vibrant music style emerged in the Jordaan. Artists such as Johnny Jordaan, Willy Alberti and Manke Nelis sang of their love for Amsterdam and their neigborhood, romanticising the often tough life in the Jordaan.

In many pubs and cafes in the Jordaan this music is still played. It sounds a bit like Italian belcanto and the texts are often a bit cheesy. Every year there is the Jordaanfestival, a musicfestival at the Appeltjesmarkt.

Jordaan District in Amsterdam on the map