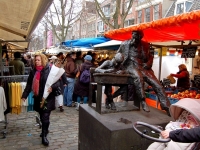 Today, together with the nearby Farmer’s Market on the Nordermarkt, (both open on Saturday); Lindenmarkt is probably the best food market in Amsterdam.

Go there on Saturday morning, but not too early, as it only starts at 9 am. First, you will see a bronze sculpture standing in the middle, representing the Dutch writer and educator Theo Thijssen, teaching one of his pupils. Further on, along 900 meters of the market – you will have food and fruits of the best quality – fresh fish, excellent cheese, good vegetables, as well as clothes, general goods (mostly imported from China), bicycles, DVD’s.One of the best flower shops in town (Pompon – Prinsegracht 8) and an interesting interior shop are nearby (Fens Décor, Prinsengracht 12) nearby. Some good cafés, pubs and restaurants in the proximity.

Hercules Pieterszoon Seghers (1589-1638) – Dutch painter and etcher known for his landscapes, lived at Lindengracht. His house does not exist anymore.

As on any market in any country: beware of pickpockets

Lindengracht which translates into English as the lime tree canal, has been filled up during the modernization of the city at the end of the 19th century and turned into the wide street with two rows of the huge lime trees in the middle. Each Saturday, 232 market stands are built along the whole street. Lindenmarkt - originally just a Jordaan neighborhood market, exists since 1895 and since 1922 it is so called day market – it is open up into the late afternoon hours.

Busy and joyful. Best place to buy fresh fish, fruits and flowers. As the quarter of the Jordaan became fashionable in the seventies the atmosphere changed: today the public is often elegant, with local celebrities among the crowd. Good ham sandwiches, Dutch haring and fresh juice to eat and drink in the street.

How to get to Lindengracht market

By foot: ten minutes from the Central Station – get to the Brouwersgracht, walk away from the center on the left side of the canal, pass all the main canals including Prinsengracht you will see the Lindenmarkt on your left
By tram: 3 & 10 station Marnixbad
By bus: 18, 80, 82, stop Marnixbad.
By car: exit the ring A10 via S105 and turn left, continue through the Jan van Galenstraat; continue straight on through the round point at Hugo de Grootstraat; turn into the second left - Nassaukade. Park your car there or in one of the side streets (metered parking). Walk to the market 5 minutes.

Lindengracht Market in Amsterdam on the map