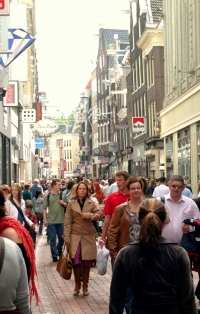 Amsterdam is an old city - almost the whole center dates from the 17th century and while towns were much smaller centuries ago and even the biggest Europe’s capitals as Paris or London had only one million inhabitants, Amsterdam kept its previous scale and remained until today a small metropolis. Sometimes people call it the smallest of the big cities. That makes shopping in Amsterdam fun, because you may do it all walking. Amsterdam is also full of small shops, with unique import contacts - their choice of products in Amsterdam will be different from any other big city. Here are the best shopping streets of Amsterdam:

Probably the busiest of all shopping streets of Amsterdam, goes across the city center. Kalverstraat is usually crowded with many shops selling competitively priced products. As often in Europe, no car traffic there, just shoppers. Two big shopping malls are located directly at or nearby the Kalverstraat - Kalvertoren and Magna Plaza and several big department stores - Bonneterie, V&D and not far from the Kalverstraat, at the Dam – the Bijenkorf. North East section of the Amsterdam main shopping street continues from the Dam square, but then it is called differently Nieuwendijk, which makes a sharp curve left and after a crossing falls into yet another interesting shopping street – Haarlemmerstraat.

Each of these small streets hosts tens of the best fashion shops in town, plus cafés, bookshops, design shops, small food and wine store. Enjoy walking there, because you will never find so many interesting shops cramped into such a small area of the Old Town

Leidsestraat connects always crowded with tourists Leidesplein square where many cafes, cinemas, theaters and clubs are located, with the city main commercial street – Kalverstraat. Attractive shops as Abercrombie & Fitch, Metz Co.(presently renovated) and Camper shoes attract shoppers. Trams ride in the middle of the street, carefully making their way through the walking crowd connecting Leidsestraat with other parts of the city. 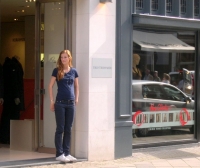 This is the Rodeo Drive of Amsterdam: modest architecture and the best shops in town. This small street in a close neighborhood of the Rijksmuseum, Stedelijk and the Van Gogh Museum, parallel to the Paulus Potterstraat where the two last are located, is not to be missed. Expensive and posh, but the choice is good: world’s biggest brands, luxury clothes, shoes and cosmetics. You will hardly see anywhere in Europe a small street with so many good cars parked one by another. 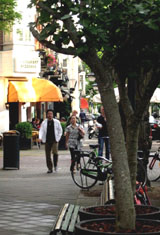 In a short walking distance from the P.C.Hooftstraat, a side street located behind the Concertgebouw. This is a shopping centre for the people who live in that expensive area of town with everything you might need – best quality food, cosmetics, wine, but also best in Amsterdam flower shop, several design and gadgets shops and good café where you may have your lunch. Christie’s auction house is nearby and Amsterdam Hilton, famous for the Yoko Ono and John Lennon stay, just two hundred yards further. It looks like they made a mistake remaining all the time in bed.

A busy street that goes out of the Rembrandtplein and has several shops, which are so good on their field that shopping there is fun. Best for the design items, gadgets, but also shoes and clothes with probably the best records shop in town in the middle. With very narrow sidewalks, trams passing in the middle and noisy traffic, but the shops there are quiet, interesting and close one to another. Several good restaurants and excellent wine shop are located at the Utrechtsestraat.

An elegant street in the South Amsterdam (Amsterdam Zuid). Built in the 30-ties of the 20th century, more modern and convenient to visit than the Amsterdam old streets, with wide sidewalks and big shop windows. Good shopping street for clothes, wine and chocolates. Several informal places where you may have your lunch with authentic Japanese deli shop Medi-Ya know for the best sushi in town, and a good Dutch cheese shop with excellent sandwiches (Dutch: broodjes). 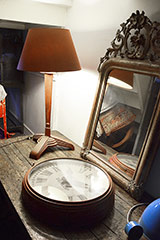 Usually a sleepy wide street, known before only for its Monday market, became last years the whole area in the Jordaan very popular for shoppers because of the design stores as Moooi and Anno, several decoration shops in the Westerstraat and at the nearby Noordermarkt and a short section of Prinsengracht just behind the corner with unique Fens Decor and exceptional Pompon Florist selling flowers and plants. Growing popularity of the Saturday’s Farmer’s Market on the Noordermarkt also made Westerstraat an interesting street for shoppers.

Just a short wide street parallel to the lively Waterlooplein flea market, with all standard Dutch stores like Albert Heijn, Blokker, Zeeman, Gall&Gall and Etos, is known for the Rembrandt House located at number 4. Jodenbreestraat name means in Dutch ‘Jewish Broad Street’ and it was one of the important streets of the Old Amsterdam Jewish quarter. Historically the street has not been so wide as today, but its Northern side has been demolished in 1970’s with some daring freeway plans in mind, happily later abandoned. Very much under influence of the nearby market, Jodenbreestraat has also some excellent shops with vintage clothing and accessories such as ‘Episode’. 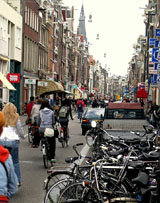 Probably the youngest of the trendy shopping streets in town. Less expensive but with the big variety of shops, many of them new trying to propose new consumer products and the new shopping formula. In this street, the public is also young. Haarlemmerstraat may feel long, especially if you walked through already the Kalverstraat and Nieuwendijk, but it is worth it. Clothes, design, cosmetics but also several utility stores, which will surprise you with their products. Many informal cafés and bars where you may take a pause.