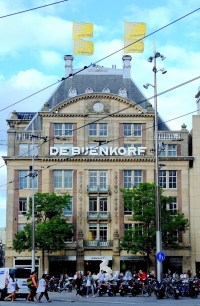 If you like shopping or if you just like to visit the interesting shops, the biggest Amsterdam department store, centrally located at the Dam square - De Bijenkorf (The Beehive) is not to be missed.

When visiting De Bijenkorf, do not just expect to fulfill your needs; rather enjoy the store’s selection and its taste. Here is the big, six floors high department store like a feast - full of light, surprising with interesting objects, shinning with modern design, a mixture of intelligence and fun.

The history of De Bijenkorf dates back till 1870, when Philip Goudsmit opened its first shop with buttons and sewing supplies at the busy Nieuwendjik street. During the renovation of the shop in 1912, it had to be temporary moved to the Dam square. The sales quadrupled and ever since the Bijenkorf, now in its monumental building dating from 1957 (designed by Marcel Breuer), has been located at the Dam square.


Bijenkorf as an institution

The Bijenkorf is an institution. Not only because of the quality of it’s up market choice and sometimes high prices. The store contains a restaurant and a coffee bar, art gallery and a hairdresser for the young people. It organizes festivities, concerts, fashion shows, cultural travels and exhibitions. It issues its own credit card and a periodical magazine.

No wonder The Bijenkorf bears the proud title Koninklijke – Royal. The Royal Bijenkorf - because it’s rich history is inseparably linked with the history of Amsterdam and the Netherlands. De Bijenkorf and its personnel bravely resisted German occupation during the WWII. The store has been burnt two times, remaining opened throughout the war years. As Jewish-owned, De Bijenkorf had to be formally handed over for the time of the Nazi rule in the Netherlands, to the non-Jewish proprietors.

Still, its central department store centrally located at the Dam, just to the left of the Krasnapolsky Hotel, and with the Beurs van Berlage behind, remains a flagship, proudly waving the flag of The Netherlands at the top of its 6 storey building.

Once a year, usually at the end of September or in October The Bijenkorf organizes three crazy days of special sales. Many objects of the top world’s luxury brands are sold at large discount, usually 25% cheaper but often as much as 40%. Amazingly the discounted products often belong to the actually most sought out and popular. On each of the three Crazy Days different products are discounted. The store opens during these days at 8.AM and the impatient crowd will find many products inside wrapped in a bright yellow paper. They will be unwrapped on each of the following days of this shopping madness.

De Bijenkorf is an up market, luxury department store and not the utility warehouse. Do not expect a complete range of products in any of De Bijenkorf numerous departments. The choice remains always selective, sharp, intelligent. It will make your shopping a pleasure.

Parking at the Bijenkorf

Parking in the garages of Bijenkorf (Dam) is available for up to 487 cars. The rates are €4 per 57 minutes or one day maximum €50.

How to get to Bijenkorf shopping centre

De Bijenkorf in Amsterdam on the map