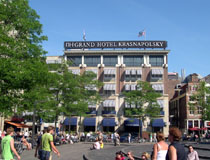 NH Grand Hotel Krasnapolsky in Amsterdam is an institution. With a reputation for good service, the quality of its rooms and excellent location at Dam Square, this hotel established more than century ago became a synonym for quiet luxury, comfort, and peace.

NH Grand Hotel Krasnapolsky takes its name from its first owner. The hotel was established in 1866 by a Polish tailor, Adolf Wilhelm Krasnapolski, who arrived in the Netherlands only ten years earlier. Krasnapolski first opened a popular café, often called the Polish Café, and added rooms for rent, and later rebuilding it into a modern hotel. It was the first hotel in Amsterdam at the end of the 19th century to have warm water and telephones in each of the rooms, and by 1883 already serviced by electricity. 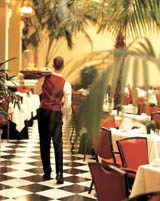 Facing the Kings’s Palace, the hotel on the Dam was such a success that Krasnapolski bought 39 small houses in the area to build the hotel as it stands today – the biggest five star hotel in the Netherlands, with 468 rooms, 1 tower suite and 6 junior suites, 36 apartments, and three restaurants: the French Reflet, Bedouin Shibli and Japanese Edo & Kyo Winter Garden. Its congress center accommodates up to 2000 guests.

NH Grand Hotel Krasnapolsky prevails through comfort, convenience, and a low profile. Its tradition is to offer luxury without ostentation. Despite its size, it is warm and welcoming. While certainly old fashioned in its atmosphere, it comes out in a positive way, as it remains modern in its service, means of communication, and attention to detail. You will feel at home there.