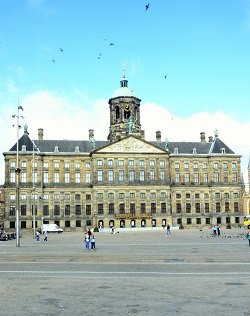 The Royal Palace of Amsterdam is situated on Dam Square in very the centre of Amsterdam. It was originally built as the city hall for the magistrates of Amsterdam. In the 17th century it was the largest secular building of Europe. Learn more about its history.

Today the Royal Palace on the Dam is one of the three Palaces, which the State has placed at the King's disposal by an Act of Parliament. It is used for Royal Events like reception of the foreign heads of state during their visits in The Netherlands, the King's New Year reception and other official receptions. Every year, it provides the setting for the presentation of various official and royal prizes.

The Palace has been opened to the public for most of the year (open the whole week except Mondays). Only on days of Royal Events, visiting of the Palace by the members of the public is not possible. Still it might be interesting for you to see the official visitors arriving. Please consult the Palace’s website and their calendar to see the days when the Palace is open for the public, as well as some of the upcoming Royal Events.

For most of the year it is open 10am to 5pm but look at their website to see on which days the Palace is closed to the public.

A qualified art historian will lead you through the chambers of the Palace (for groups of adults of 10-20 visitors and children 5-15 visitors). The usual admission price is required. The guide should be booked beforehand – there is a possibility of reserving the guide via the Palace website. Apart from the general tours there is a possibility of the tour on the special theme like “The Empire Tour”, presenting the Palace during the Napoleon’s Empire (1804-1815).

A free audio tour is provided in the following languages: Dutch, English, French, German, Italian, Spanish.
The Palace is accessible for visitors on wheelchairs.
No cell phones – you are required to switch them off before entering the Palace. Photography is permitted under condition that you do not use flash or tripod.
The Palace shop offers a number of cards and books on the subject. Orders may placed also via Internet.

Dam Square, Amsterdam
Catalogues and guidebooks of the collections and actual exhibitions are for sale in the museum shop, as well as books, postcards and royal souvenirs and gifts.

Amsterdam Royal Palace on the map