Amsterdam » Getting around » Travel » Centraal Station 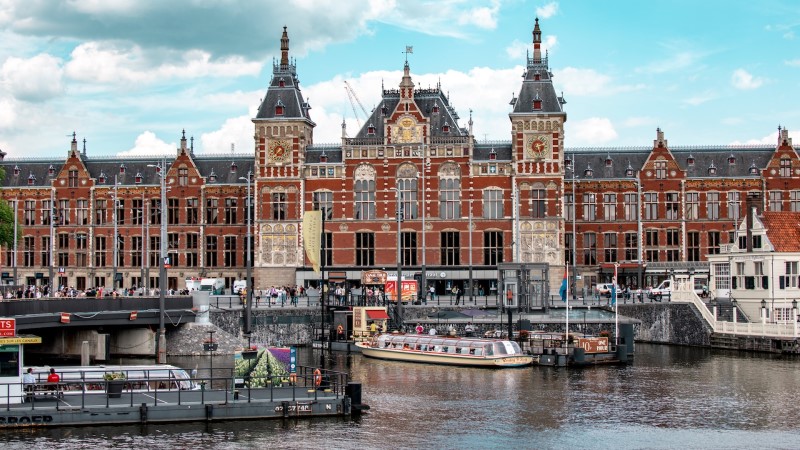 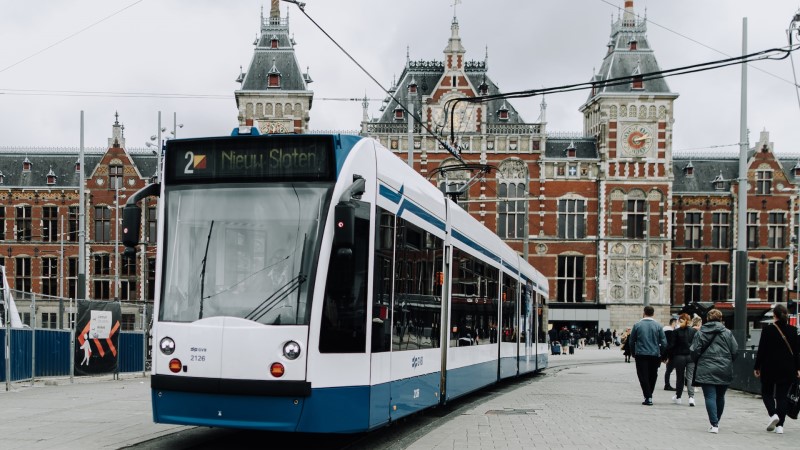 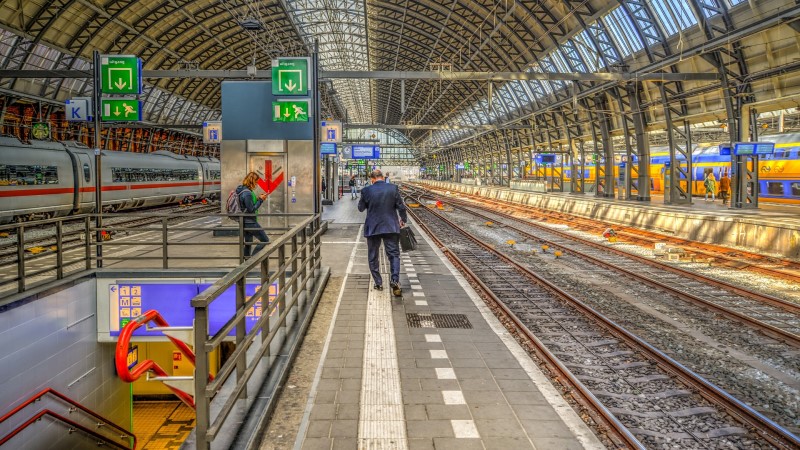 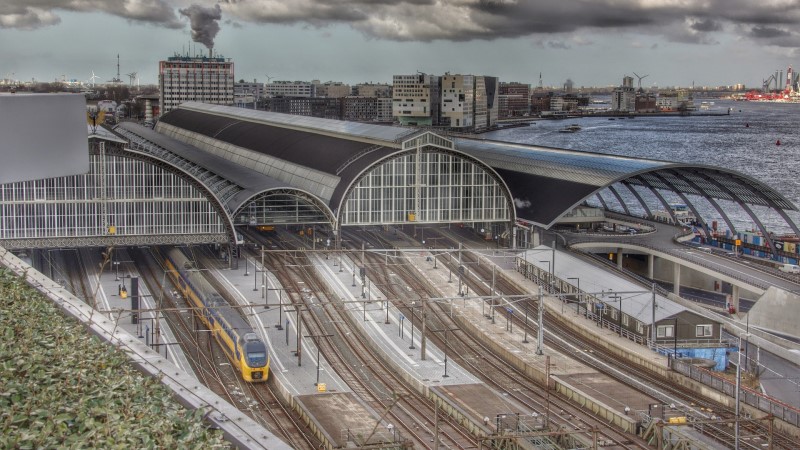 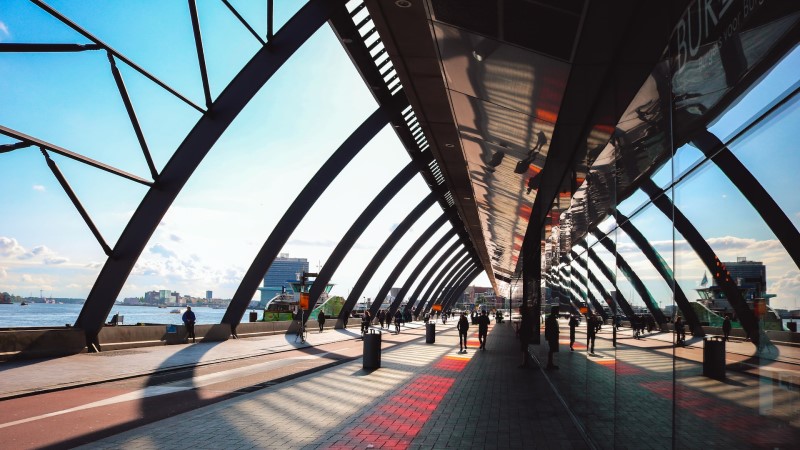 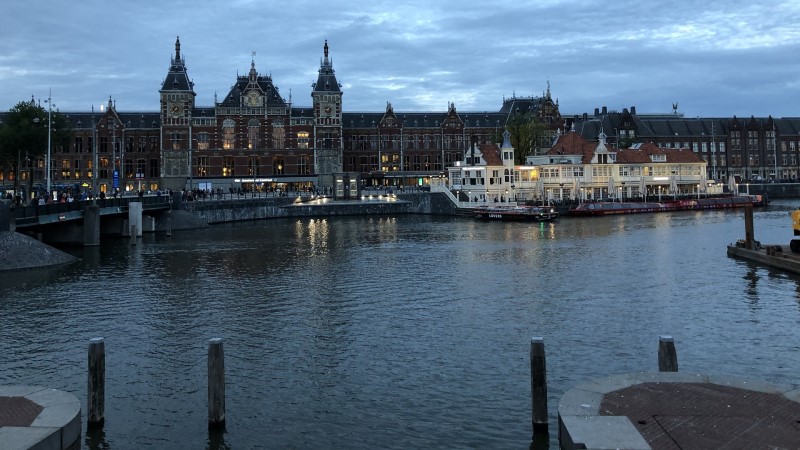 Public transport and taxis at the Central Station

Busses and trams are at hand on both sides of the station building but most of them depart on the city side. Trams serve the main city area while busses go farther to the outskirts of the city.

Taxi services are waiting on the Ij-zijde (waterside) to the left from the Western tunnel thus behind the station looking from the city centre side. Taxi drivers are not allowed to refuse a short trip. Ride apps like Bolt and Uber are also here.

The entry to the metro is in front of the station main entrance, on the city centrum side.

Also the tourist boats that provide canal cruises depart on the city side.

The city ferry boat lines linking the city with Amsterdam North are behind the station at the waterfront (Ij-zijde). Pay attention to the traffic of scooters making sometimes access to the ferries quite inconvenient. The ferries leave every 30 minutes, they are free.

Also inter-city busses depart from the terminal on the waterfront.

It is recommended to book airport train or taxi in advance. You can do so through our Amsterdam airport transfer webpage.

However if you are a visitor for a short stay in the Netherlands, you are advised to buy a specific ticket for one trip. You have to validate this ticket at the entry to the platforms area on each train station (chip-in) and signal the end of your trip leaving the platforms area of the station (chip-out). Through the deregulation of the public transport there are many possibilities to travel on the same train, busses and trams.

There are convenient Information desks at the entry and numerous vending machines sell train tickets to other stations in the Netherlands. Service Centre sells international train tickets (open: 6 am - 11 pm).

There are several hotels based in front of the Central Station and in its direct vicinity. You do not need any means of travel to get there. Best known are the five star NH Barbizon Palace and Hotel Victoria. Amsterdam Ibis Centre, that is built on the station island, is the closest. Cheaper choices include Bellevue Hotel, A-Train Hotel and Multatuli Hotel as other good budget choices.

The station is the most central point of Amsterdam. As a heart of the historic old town. So there is much going on around. Some of the most popular attractions within walking distance of Amsterdam Central Station are:

Arriving at the Central Station Amsterdam

The station has three tunnels under all of its platforms, leading you in two directions: to the Amsterdam Centre side (Centrum) or to the Amsterdam North side which is located behind the Ij Lake now called the Ij-zijde (The Ij side). These tunnels are called Eastern, Main and Western and each of the leads to all railway platforms. There is also a new tunnel under the station, centrally located Ij-passage which is more of a shopping area because it does not lead to the train platforms but is a convenient way of getting to the lake side of the station.

Unless you plan to travel by city ferry to the north of Amsterdam or by bus to other cities you should exit into the Centre (Centrum) side of the station. All city busses, trams and metro to all areas of Amsterdam are there, including the bus lines to the north of the city. Only the taxis stand is now also located at the Ij-side to the left from the Western tunnel.

Accessing the station - departures from the Central Station

The main entry tunnel as well as the two other tunnels lead you to the station platforms. The station has 15 platforms, additionally often divided into "A" and "B" parts. Entering the station, you may inquire about the number of the platform you need at the Information desks set inside at the entries to the station.

Amsterdam has convenient fast train connections with other European cities as Brussels, Paris and Cologne. Only the line to Brussels is leaving from Amsterdam at fully high speed. Thus you may visit Brussels with ease during your stay in Amsterdam. And beyond Brussels, Thalys trains travel at max. speed of 300 km/h (190 miles/h), reaching Paris in only 1h and 22min.

In front of the station Main Entry, in a traditional wooden white Dutch coffee house you will find the main Amsterdam Tourist Office of the state run VVV (Dutch: Vereniging voor Vreemdelingenverkeer - Association for the Foreign Visitors). It is open daily: 9:00 - 17:00, except Sunday when it closes at 16:00.

To the left in the same building you may find an Information Service of the public transport GVB (open: Monday through Friday 07:00 - 21:00, Saturday-Sunday 8:00 - 6:00; they also sell public transport tickets).

Amsterdam Central Station and its area are by and large safe. Nonetheless, stay alert about your luggage and as on any train station in the world beware of pickpockets. If you buy a ticket at the vending machine, be careful with your wallet and do care about the secrecy of your PIN identification code.

If you depart from the station, arrive 15 minutes earlier and set aside some time for the transfer to the platform.

Reconstruction of the Amsterdam Central Station

Central Station impressive Neo-Renaissance building has been open to the public in 1889. As the city grew, the station had to change. The new bus terminal had been recently added at the back of the station - on so called Ij-zijde (Ij Lake Side). It is here that the busses depart to other Dutch cities.

Amsterdam Central Station on the map