The lockers vault is at the East Entry (Ingang Oost) to the station: open 24 hours a day, 7 days a week. While rather expensive, the lockers are a convenient way of storing the luggage for a day or two. The lockers do not accept coins – you pay with a credit card, pin card or a special chip card, which can be bought at the Service Center at the other end of the station. Service desk in the lockers area does not sell chip cards.

Luggage lost on the train should be reported at the desk to the left of luggage lockers. All objects found on trains are stored centrally in Utrecht. If you lost a piece of luggage or another object in the station, you may report it to the police, as any other object lost in the city. Found Objects Bureau might have it: Bureau Gevonden Voorwerpen, Stephensonstraat 18, 1097 BB Amsterdam, phone: 559 30 05. 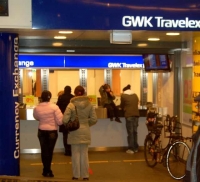 GWK Travelex Western Union office is in the station’s main tunnel (open: 8 am – 10 pm, Sunday 9 am – 10 pm). There is an additional GWK counter inside the Service Centre (irregular hours).

If you arrive for one day trip to Amsterdam, you may start your visit from a canal boat tour. Two canal boat companies - Rederij Lovers and Canal-Bus offer different boat cruises departing in front of the Central Station. Their ticket offices are in kiosks at Prins Hendrikkade street in front of station’s the main entry (open: 9 am – 10 pm).

You may rent the bicycles at Mac Bike Centraal East at the station’s East Entry; open: 7 days a week, 9 am - 5.45 pm; original passport and a credit card needed. No reservations.

Bringing by car handicapped people to the station has been made difficult. You may access the station by car only from the North side, but only for a drop-off; you may not legally park your car there. Taxi is a better option as cabs are allowed to get closer to the station. For the rest, all facilities of the station have been made accessible for the handicapped. Lifts to the platforms are in the middle of the main tunnel of the station, with the exception of the lift to the platforms 2 and 3, which is to the left of the Eastern Entry (Ingang Oost).

You may not smoke at the station. A € 50,- fine will be given to people who contravene the ban. You have to walk outside to smoke or smoke in the especially indicated area on the platform 2b.

International train tickets should be bought earlier at the Service Centre (open 6 am – 11 pm) directly at the station’s Main Entry accessible from the main tunnel and from the outside of the station building. There are usually long lines of people waiting there, even out of the season. Be patient as most of these tickets are complicated - issuing them takes time.

Service Centre offers also more complicated train connections information and a change of currencies at the GWK cashier window (at the back of the Centre hall).

Tickets to the Dutch stations (as to Schiphol Amsterdam Airport) can be bought at the yellow vending machines. There are many of them to the right from the main entry and all over the station. On their touch screen you will have to first select your destination, class of your journey, day, your return and the way of payment. Only then, you insert for a short moment your bank or credit card. The machine will also accept euro coins.

The machines changing bills of €5 and €10 to coins (Dutch: Wisselautomaat), are at the entry to the station Service Centre