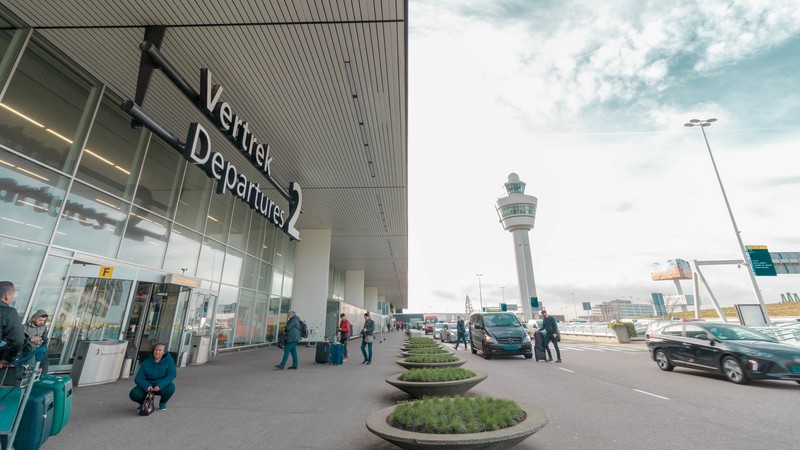 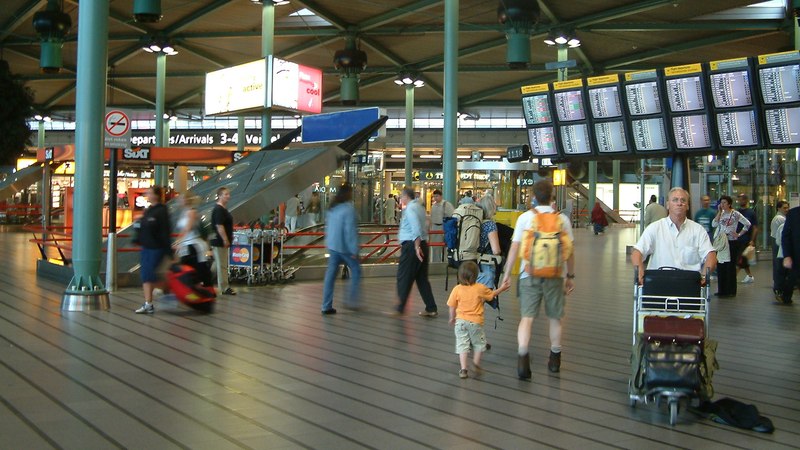 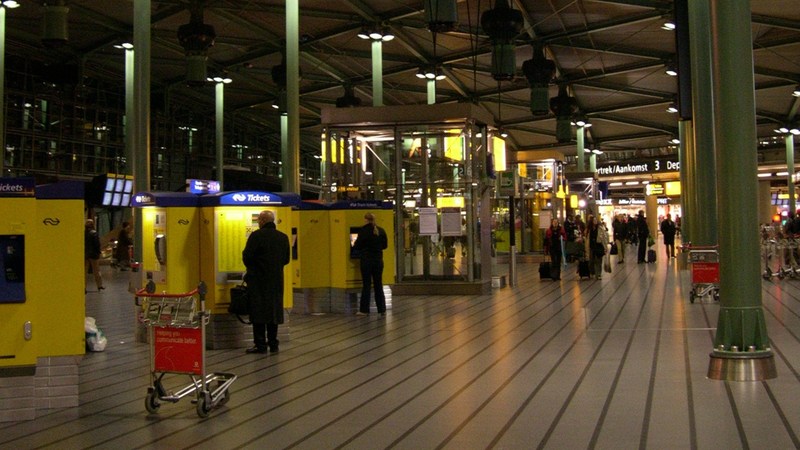 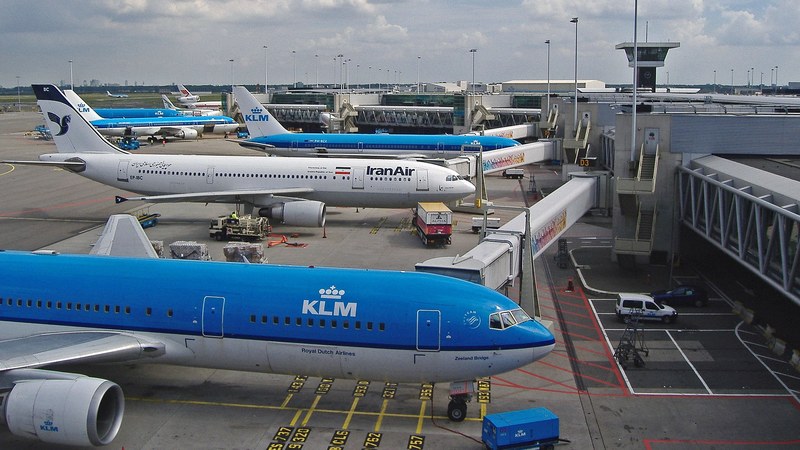 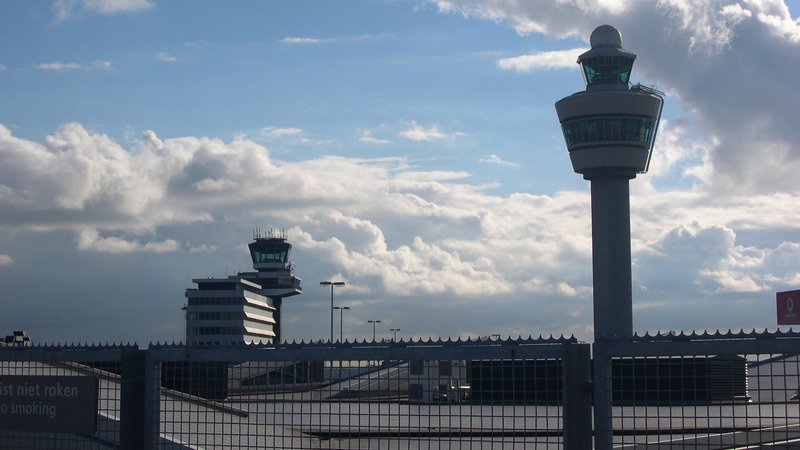 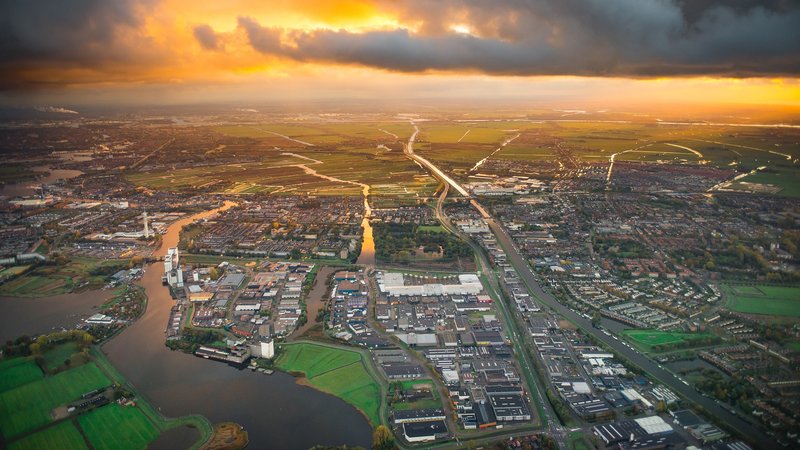 The biggest and busiest airport in the Netherlands is Schiphol Airport just 14km outside Amsterdam. It is also one of the major European airport transit hubs efficiently handling over 40 million business and tourist passengers per year. The Dutch national airline, KLM, is based there and is the largest airline group in the world. Over 100 other airlines fly into Schiphol too, among them over twenty budget airlines offering cheap flights from many European countries.

There are several airport hotels at and around Schiphol Airport, including two transit hotels in the terminal building itself. These airport hotels are ideally placed if you have an early flight to catch, or need to hire conference facilities for business meetings. Transit passengers with time between flights will find them useful too.

Trains depart from platforms underneath the Schiphol Plaza and can be reached by either escalators or lifts. As well as to Amsterdam Central Station, there are also direct trains from the airport to other parts of the country. The International trains, including the Thalys, south to Brussels and Paris also stop at Schiphol station.

It is recommended to book airport train or taxi in advance. You can do so through our
Amsterdam airport transfer webpage.

Other airports nearby Amsterdam

You can look at our pages about Eindhoven Airport, Rotterdam - The Hague Airport and soon to open Lelystad Airport to find general information about them as well as the transport options to Amsterdam.

As Schiphol Airport is so close to the city centre, there are several ways to get quickly from the Airport into Amsterdam. On leaving the baggage reclaim area, you enter Schiphol Plaza, and you can follow the sign posts to find the trains, taxis, shuttle buses and car rental. Train is the cheapest and perhaps the most convenient. They run 24 hours a day and take about 15 minutes. Train tickets can be bought at ticket counters or the yellow ticket vending machines in Schiphol Plaza. Taxis are in the rank just outside Schiphol Plaza. Some hotels provide their own free airport shuttle bus, but there is also the Conexxion Hotel shuttle bus that services 100 city hotels. It runs between 6.00a.m. and 21.00 p.m. All the major Amsterdam car rental companies have offices in Schiphol Plaza. You can chose from Avis, Budget, Europcar, Hertz, National Alamo and Sixt.

Leaving the Netherlands will be fairly stress free. The excellent transport infrastructure means that Schiphol Airport is within easy reach of not only the city of Amsterdam but also practically the whole of the country. Again the train service is the most convenient, but taxi drivers always ask which airline you are flying with to ensure they drop you off at the correct departure gate, the shuttle buses run very frequently, and the car hire drop off points are close to the Airport terminal. Security checks at Schiphol Airport are strict however so remember to allow the time for those too.

There are both long and short term parking facilities at Schiphol Airport. If you are dropping off departing passengers you can use the free drop off zone in front of the terminal. When going on a holiday break, the cheap open-air long-stay car parks provide a free shuttle bus service to the departure halls. The short-stay car parking close to the terminal building is the most expensive. Parking fees can be paid in cash, by credit card or special payment cards.

Schiphol Airport’s duty free shopping facilities are among the best in the world. Once you reach the departure lounges, you will have time to browse at your leisure for not only perfumes, liquor and tobacco but souvenirs, cosmetics, fashion, jewellery, books and newest technological gadgets. Prices are very reasonable too, with regular special offers and discounts.

Schiphol Airport has three terminals, all in a single passenger terminal building, making it very convenient for passengers to navigate. Efficient signposting in text and symbols guides passengers from the moment they enter the terminal, and ground staff are generally extremely courteous. There are many special facilities for disabled travellers, and transportation can be requested to help cover the large distances to the departure gate. Air travel involves a lot of waiting, but there is plenty to keep you busy. As well as shopping, choose from restaurants serving everything from burgers to sushi. There are two Holland Casino venues, and communication centres in departure lounges one and two, as well as wi-fi in several places. You can find the childrens’ play areas between gates E and F. The staff at Schiphol Airport try to make travel as stress fee as possible; here we’ve compiled more useful tips and advice to help your journey to or from Amsterdam Schiphol Airport run smoothly. If you don't feel like taking your luggage from hotel to airport personally there is also an Amsterdam luggage delivery service.

Schiphol is not just an international airport; it can be classed as a tourist attraction all by itself. If you are there to meet an arriving passenger take the time to explore the Schiphol Plaza. This commercial centre is open seven days a week and offers a great shopping experience, as well plenty of food and beverage outlets. There is also a huge open-air observation deck on top of the passenger terminal building with fantastic views of this busy airport. You can even visit the national aviation museum Aviodome signposted on the approach to the airport. In cooperation with the Rijksmuseum there is an art gallery displaying the masterpieces at the airport.

Amsterdam Airport Schiphol on the map