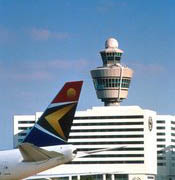 Amsterdam airport hotels also offer a good base to visit the city. Some hotels offer a transfer service to Amsterdam city centre, while in other cases you can take the shuttle service to the airport and then take a train to Amsterdam Central Station.

Hotels within walking distance of the terminal:

A luxury modern hotel attached to Amsterdam Schiphol Airport with a covered 200m. long walkway. Sheraton Amsterdam Airport Hotel and Conference Center is a truly landamrk property, not only perfectly located for individuals in transit but also delivering an excellent service to its customers. In addition, the hotel’s conference capabilities are one of the best in the Amsterdam region.

A modern five star Amsterdam luxury hotel 15 minutes walk from Amsterdam Schiphol Airport, or just 3 minutes by a complimentary shuttle bus. Well equipped rooms, a gym, two restaurants, a bar and the Business Centre next to 19 business meeting rooms make this Amsterdam airport hotel an good choice whether you are looking for a short leisure break or are a business traveller.

This five star Amsterdam luxury hotel is convenient to all the main highways easing travel throughout the Netherlands. It is ten minutes ride from the Amsterdam Airport, and guests have the use of its own free shuttle service to and from the terminal. Established in a ten story building, modern and well kept inside, this Amsterdam airport hotel includes excellent meetings and conference facilities, with specialized staff to service them.

The Steinberger Schiphol is on the eastern side of the airport, in the area where many airline offices and other facilities are to be found. This four-star Amsterdam airport hotel offers modern accommodation which is especially aimed at business travelers. Its facilities include an extensive in-house fitness and wellness complex.

The Ibis Amsterdam airport hotel is a modern three-star hotel on the northern side of the airport. It provides affordable but good quality accommodation. The Ibis forms part of the French Accor group of hotels.

This newly built medium size Amsterdam airport hotel is set in a quiet residential suburb of Amsterdam and less than 10 minutes ride from the airport by a free shuttle bus. This hotel offers quiet, comfort and good service.

The Hotel Schiphol A4 along the A4 motorway south of Amsterdam Airport, forms part of the Dutch Van der Valk chain of hotels and restaurants. Not only does this Amsterdam airport hotel have comfortable accommodation at good rates, but it also has a very good restaurant offering anything from haute cuisine to plain but delicious home cooking.

Mercure is a budget choice if you intend to stay near the Amsterdam Airport. It offers comfortable rooms with big beds and a bathroom with a bathtub. Its free shuttle bus will get you from and to the airport. Mercure Amsterdam Airport hotel has a nice restaurant, a bar, and if you are addicted to fast food, there is Mc Donald’s restaurant just across the road.

This is a nice budget Amsterdam airport hotel. Inside there is a vast lobby with a computerized check in, neat minimalist rooms with perfect beds, full air-conditioning, TFT screens, excellent soundproofing and an clear view of the airport runaway from upper floors.

If you live in Netherlands, staying at an airport hotel the night before your flight gives you the option to catch your morning flight and avoid the congested highways. You may even consider leaving your car at the hotel’s parking facility during your whole trip, saving considerably on airport parking costs.