A modern ten story luxury hotel located in the green area of the Amsterdam Schiphol Airport business park, with an own free shuttle service connecting it with the airport.

Radisson BLU Hotel Amsterdam Airport has its own on-site car park facility (for 160 cars) and it is easy accessible from nearby highways - A9 and A4. 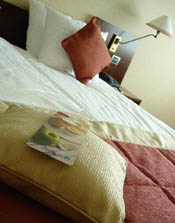 Five star Radisson BLU Hotel Amsterdam Airport offers its guests 279 air-conditioned rooms. Most of the rooms are not very big, but you have the possibility of staying in bigger Business Class room (25) or Junior Suite (11), Ladies’ Suite (2), a Royal Suite and a Long Staying Apartment. The rooms come on offer in three styles of interior decoration: Oriental, Scandinavian and Maritime. The hotel has a big lobby, 24h reception, good dining facilities, and good gym and is prepared to service bigger business meetings and conferences. WiFi Internet connection is offered throughout the whole hotel. Radisson BLU Hotel Amsterdam Airport is a non-smoking hotel.

The hotel has two restaurants – Talavera proposes regional cuisine but not without French influence, while the Lighthouse Restaurant serves modern international meals. While remaining on a luxury level, both restaurants offer tasty meals for a reasonable price. There is also a Rodolpho bar with a spacious lounge. 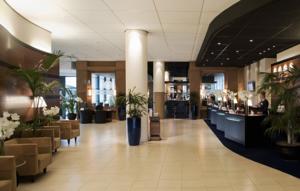 Radisson BLU Hotel Amsterdam Airport is one of the best venues in the Amsterdam region for business meetings and conferences. It has a professional Business Centre with secretarial staff as well professional hosts to assist the assemblies. A special audiovisual team is able to help at video conferences. Fast Internet connection and WiFi are operational at no extra charge. The hotel features 15 meeting rooms and a hall with a capacity for 600 guests – all of them with natural light. The conference coffee lounge is equipped with espresso machines.

Radisson BLU Hotel Amsterdam Airport is a spacious and modern business hotel, a bit dull but well equipped and in general run on very good level. Its location is rather unfortunate, since Amsterdam is only another ten minutes ride further. Nevertheless, the Radisson BLU Hotel Schiphol seems a perfect venue for business meetings and conferences especially if the participants have to fly in from different countries.