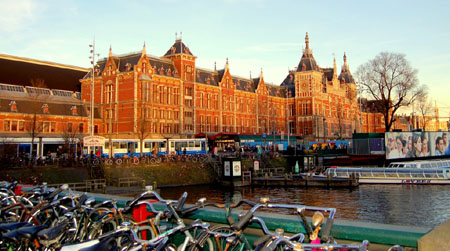 The building of the Amsterdam Central Station was built between 1881 and 1889, at the time when several important public buildings in Amsterdam as Rijksmuseum (State Museum), Concertgebouw (Amsterdam Philharmonics), Stadsschouwburg (City Theater), Central Post Office (now a shopping mall Magna Plaza) were constructed. All these fine-looking buildings were concoction of Neo-Gothic or Neo-Renaissance styles. Central Station was designed by Petrus J.H. Cuypers – one of the biggest Dutch architects, assisted by Adolf L. Gendt, who was a responsible for the structure of the Station’s building and its immense platform halls. Cuypers received in 1897 for the Central Station building Golden Medal from the Queen.

When the decision to put up the new Central Station had to be taken, the Municipality of Amsterdam considered several other sites to build it. Today’s space of Sarphati Park was one of them. Finally, as the other positions seemed too distant from the city centre, it was decided to position the Central Station at Leidseplein. Two times in the 1870’s Municipality decided to situate the Central Station there, whilst the Dutch government following the advice of the engineers, overturned this logic, establishing the Central Station on its today’s spot at the IJ lake. This decision, certainly correct as removing vast spaces of rails from the inner city, separated Amsterdam – traditionally a harbor city, from its connection to the open water area. It also separated the city from the areas in the North, slowing the growth of Amsterdam in this direction. 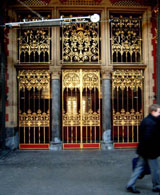 The station had been built using 8067 wooden piles, forming three artificial small islands on the IJ lake – they are called today together Station Island (Stationseiland). The station’s roof was constructed from the cast iron, made in Derby, England by Handyside&Co. The station building is richly decorated on its façade as well as inside by a painter of Austrian origin George Sturm.

In the Eastern part of station there is a special pavilion enclosing Koninklijke Wachtkamer / Queen’s Waiting Room, with a place for Queen’s carriage (today for a car) one of the five such rooms built at the time on Dutch train stations. While it is not possible to visit it, you may admire its magnificently ornamented gate (Platform 2b).

To the bewilderment of the visitor, for the last three decennia Amsterdam Central Station is steadily under construction. Today's building works are related to the creation of the new metro line. In addition, the setting up of the rails for High Speed trains will also imply changes.