Central Station is an important public transport centre for the whole Amsterdam. It connects by tram, bus, metro, suburban train and ferry boat to every point in the city.

For unlimited public transport for tourists we recommend the I Amsterdam City Card which also offers other benefits like free entry to museums and attractions.

Tram, Bus and Metro in Amsterdam 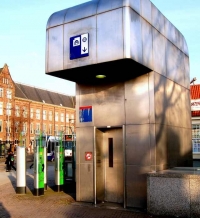 Tram is the most convenient public transportation mean in Amsterdam. The following tram lines have their initial stop at the Central Station:
At the front of the West Entry (Ingang West) – lines: 1, 2, 5, 13, 17.
In front of the East Entry (Ingang Oost) – lines: 4, 9, 16, 24, 25, 26.
Most of the trams are adapted to serve handicapped people. It is clear marked on the tram schedule, which trams are not suitable for the handicapped.

Metro plays increasingly important role in the life of Amsterdam. Check the existing lines because they are the quickest way to travel out and the Amsterdam centre. Metro is more a convenient train to the suburbs going underground only in the city centre. Three lines from Central Station (51,53, 54) will connect you with distant South and distant West areas of the city.

Upon your arrival to Amsterdam

The whole transport in the city is deregulated and different tourist firms sell different Chip cards valid for different period of time at different prices. You are advised to compare these offers and choose the best for your needs. Also tourist discount cards as iAmsterdam card and Holland Pass offer free public transport for a limited period of time.

Inside the station, at the Western Entry (West Ingang) there are a blue-grey city transport vending machines. They also sell public transport Chip cards and some of them serve as machines to upload the necessary credit to the Chip card account. Do not confuse these machines with yellow machines selling train Chip cards.

If you do not have a Chip card for public transport, you may always purchase the One Hour Chip card from the conductor on a tram (enter through a middle door) or from the driver on a bus (front door), but this is rather expensive way of using the public transport at € 2,90 for one hour ride. 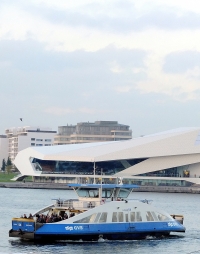 The city maintains three ferry lines (Dutch: pont) to the north of the city. The stops are located behind the Central Station. The ferries leave every 30 minutes, they are free, and so is the transport of the bicycle.

Taxis are waiting on the left from the Western Tunnel of the station, at the Ij-zijde (Ij-lake side of the Central Station), thus behind the station walking from the city. There is usually a long line of cars there. Amsterdam Old City centre does not know long distances from the station. Only if your hotel is beyond, the ride will cost you more that € 15,- on the meter. While most of the taxis accept major credit cards, be prepared to pay cash for your ride. Taxi drivers are not permitted to refuse short trips. 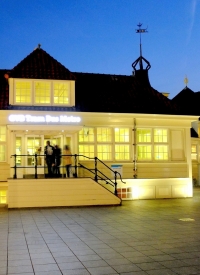 The municipality maintains a public transport information centre in the same traditional building as the Tourist Information Office. If your destination is far away from the city centre or somewhere in the country, they will inform you how to get there. This is the best place to inquire about the Chip card you need.
Open: Monday - Friday 7 am – 9 pm, Saturday – Sunday: 8 am – 6 pm.
www.gvb.nl