A small museum opened in the lobby, cafeteria and the corridors of the retirement home ‘De Rietvinck’ about the history of the Jordaan, traditionally one of the poorest areas of Amsterdam. The Jordaan has been always characterized by its own rich and joyful folklore and a unique way of life of its people. 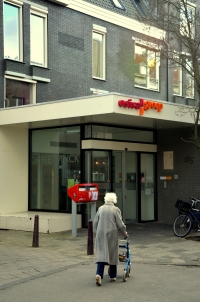 Since 1970-ties the Jordaan became very popular, especially among artists and young professionals. Today it is one of the priciest areas of town, with small but superbly renovated houses, scores of galleries, restaurants and cafes.

The Jordaan has been traditionally populated by simple, hard working people. Their folklore praises joy of life and beauty of Amsterdam. For more than a century their songs, simple and full of humor, were repeated by people elsewhere in the Netherlands. Singers from the Jordaan often achieved the national notoriety. You may see our video about people of Jordaan celebrating Queensday.

Showing this rich tradition, the museum did not avoid difficult moments in the Jordaan history. Several times in the past, in 1886, 1917 and 1934 the population revolted and the army had to be called in, to restore order. These tumults are today thing of the past, mere a subject for a peaceful reflection.

Special attention has been given to Dutch publisher Emanuel Querido (1871-1943), who lived near the Keizersgracht, who was murdered by the Nazis during the German occupation. He is recognized as the man who published in 1934 in the Netherlands first paperback books, a year before Penguin. His brother Israël wrote four books about the life in the Jordaan. 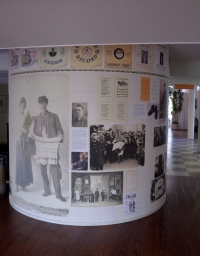 Jordaanmuseum presents a small but interesting exhibit with a strong local taste. There is a something sympathetic seeing old inhabitants of the retirement home passing by the exhibit about their youth. Since all descriptions of the display are in Dutch, we recommend that you contact the museum for a possibility of a short guided tour.

Guided Walks in the Jordaan

The museum organizes guided walks in the area at the cost of € 8 per person for 2 hour long tour with minimum of 6 participants per tour. Please make your reservations per e-mail at:
pr-wilma@jordaanmuseum.nl

The admission is free

By public transport: from the Central Station bus lines 18, 21, 22; tram 3 from elsewhere in the city; stop: 'Harlemmerplein'

By car: from the Amsterdam ring A10 take an exit S116. Ride through the Ij tunnel, take directly right after the tunnel and continue on Prins Hendrikkade in front of the Central Station following the main street along the elevated railroad until you reach Harlemmerplein, then take left on a square and try your luck with street parking in the area at € 4 an hour; closest car park is P1 Parking Amsterdam Centre in front of Central Station.

Jordaan Museum in Amsterdam on the map