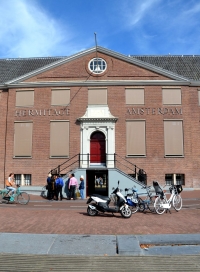 Russian former capital - the city of Saint Petersburg, today one of the Europe’s largest cities, was built by the tsar Peter the Great starting from 1703, after the tsar’s stay in Zaandam and Amsterdam during his grand trip to Western Europe (so called Great Embassy: 1697 - 1698). The city original name had been Sankt Petersburg. Known also as Petrograd and later for years as Leningrad, the city bears today its original Dutch name. But the Dutch element is not only in the city’s name: Saint Petersburg was built with the help of the Dutch, since the area chosen by tsar Peter for its foundation, was muddy and full of swamps.
The contacts between Amsterdam and Saint Petersburg continue up to these days, and since February 2004 the famous Saint Petersburg state museum – the Hermitage, has one of its dependences in Amsterdam (the other are in London and Las Vegas).

The museum is divided into three parts and each has its own price. It is best to check the details on their website. But The price for the whole museum is €25.

Visit to this museum is for free with I Amsterdam City Card. You also get public transport, museums and attractions and canal cruise. It is highly recommended for tourists.

Hermitage has an easy wheelchair access. Wheelchairs and walking frames are also available at the museum. Advance reservation recommended.

The Hermitage of Amsterdam is located in an old, monumental building called Amstelhof which since its creation in 1683 until 2007 served as the house of care for the elderly. Since June 2009, the Amsterdam Hermitage one of the two largest museums in Amsterdam, along with Rijksmuseum. The Amstelhof building is located directly at the river Amstel, near the Magere Brug and has a large internal courtyard, very pleasant in summer. 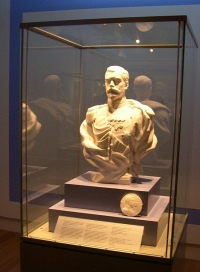 Hermitage Amsterdam organizes exhibitions on one selected theme, giving usually two showings each year. All the exhibited art objects are transported from the State Hermitage Museum in Saint Petersburg, first with a truck to Finland, and then shipped to North of Germany, to be brought again by truck to Amsterdam. After the exhibitions, all art objects have to travel back to Russia.

A big, very modern, beautifully arranged museum. Its exhibitions are not as rich as at the other Amsterdam museums, but remarkably interesting since most of the exhibited works are unknown beyond Russia. Among shown masterpieces, there are always big names of the world’s art, because Hermitage St. Petersburg collection is one of the richest in the world. 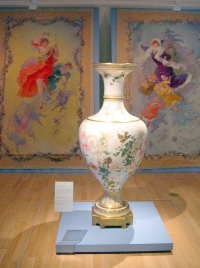 Most of the museum space serves for other activities as studies, concerts, activities for kids. The museum library is open on Wednesdays and during weekends. The museum has
Hermitage Amsterdam has also a café-restaurant called Neva, where Chef Ricardo Eve serves his two-course lunch. The restaurant is accessible without an entry ticket.

Hermitage Amsterdam is prepared to receive the handicapped visitors.

How to get to Hermitage Museum

walking: from the Waterlooplein walk along the Amstel River up the river for 200 meters on the left bank, the Hermitage will be just behind the bridge (5 minutes)
by public transport: trams line 9 from the Central Station, and line 14 from the city - exit on the stop Waterlooplein; metro lines 51, 53 and 54 to the Waterlooplein station and walk as above
by car: park your car at the Stopera Parking garage on Waterlooplein 1, located under the huge, white Stopera building (the Muziektheater/Stadhuis) and walk as described above.

Hermitage Museum in Amsterdam on the map