A popular tourist attraction, Madame Tussauds is located at the Dam square, above Peek & Clopenburg department store. More an attractive ride in an indoor amusement park, than an old fashioned wax figures cabinet, Madam Tussauds in Amsterdam has been modernized, equipped with multimedia effects, set to employ actors and extras and like any amusement park it addresses itself mainly to children and teenage visitors. 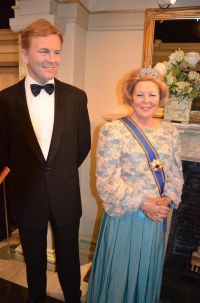 Madame Tussaud was a real person, Anna Maria Grosholtz (1761–1850). Born in Strasbourg, France, she moved to Switzerland, where she served as a housekeeper to a physician in Bern. Making a wax mask of dead person or casting a model of celebrity’s hand was at the time one of the few ways of preserving the person’s image for future generations and it has been a physician’s job. Taught by her master and skilled herself in waxworks, young woman moved to Paris, married François Tussaud and witnessed the violence of the French Revolution of years 1789 - 1799. The story goes, that she made hundreds of death masks and head sculptures of executed aristocrats, often pulling more interesting head from the pile of hundreds decapitated bodies.

Tussaud lived later in London and when she died, her collection counted 400 figures. The first Tussaud’s cabinet of wax figures opened in London at Baker Street in 1835. It included the “Chamber of Horrors” showing figures of victims of the French Revolution and famous criminals, already caught and hanged. Seriously damaged by fires of 1921 and 1941, during the Blitz – WWII German bombings of London, when many valuable figures at the Tussauds just melted, the collection has been rebuilt and today is owned by British amusement parks operator Merlin Entertainment. Madame Tussauds exhibits exist in several major world cities.

Especially in high season the waiting line can go up to 1,5 hours. Be clever and enjoy Madame Tussaud's buying your tickets online.

Peek & Clopenburg building which houses Tussauds, corresponds in its architecture with the nearby Royal Palace. An enormous roof has been added on the top of the building, to accommodate Claas Janszoon - the world’s largest animatronics’ wax figure, 5 meters (18 feet) tall, greeting you at the very beginning of your visit. While the Madame Tussauds cashiers are located on the street level, two big elevators bring visitors to upper floors of the building. During your visit, you will slowly walk down, ending for the last two floors on a small, grey staircase. 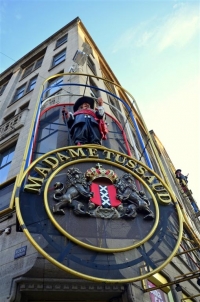 The show tries to shake off the morbid feeling of a traditional wax figure cabinet, using multimedia and animatronics. Most of the wax figures at Madame Tussauds were made taller and prettier than people they were supposed to represent. Hence you will see very tall Elisabeth Taylor, while she was a petite woman of 1.57 m, slim Albert Einstein looking like a pop singer and other celebrities - all thinner and taller, probably to make them stand out from the visiting crowd. Time and again you will have to check their names to learn, whom you are supposed to see. Celebrities will impress most of teenagers, especially so called Pop Idols Experience and Models Zone. There is even a possibility to dress like Michael Jackson and have your photo taken. Nevertheless - the grown up visitors of Tussauds might feel let down.

The Dutch Golden Age attraction is impressive, but further you move into the Madame Tussauds Scenerama, it gets less appealing and rather tacky. The feel is mixed, but if you liked Disneyland or another amusement park of this kind - do not miss it, especially if you travel with children. A spectacular view from the round window at the top of the building on Dam, direction Central Station. Overall a visit to Madame Tussauds is also a great photo opportunity.

Madamme Tussauds Amsterdam is open from 10am to 6pm.

How to get to Madame Tussauds

Madame Tussauds Amsterdam on the map