The Stedelijk Museum is the museum of modern art in Amsterdam and is located at Museumplein which makes them neighbours to the Van Gogh Museum and the Rijksmuseum.

As the Dutch call it short Stedelijk (Municipal), strives to be one of the most innovative and interesting museums of modern art in the entire world. After eight years of renovation and a construction of a new building next to the old one, the museum has reopened in September of 2012. Moreover, while again, almost as at its first opening more than hundred years ago, the Stedelijk Museum drew controversies for its artistic choice, its policy and its financial decisions, the new museum is yet again interesting and fun to visit.

To avoid waiting lines we recommend to buy your Stedelijk museum tickets online.

The museum was prepared to receive handicapped visitors. No pets except for the registered guide dogs for blind or partially sighted.

Taking photographs is permitted as long as you do not use the flash or tripod. Cellular phone use is not allowed. 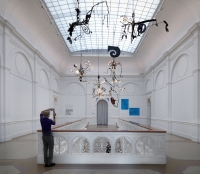 Established in 1895 as the municipal museum, the Stedelijk became only in 1938 the state museum, with its interests divided into many disciplines as art, objects documenting history of Amsterdam now in the collection of Amsterdam Museum and specific subjects as history of medicine. It is only at the beginning of 1970’s, that the Stedelijk became solely the modern art museum.
Today the Stedelijk Museum in Amsterdam has one of the richest modern art collections in the world. Along with all important names of modern painting movements as Impressionists, Fauvism, Cubism, Expressionism, it has a unique collection of 29 paintings by Casimir Malevich, equally exceptional collection of De Stijl and Cobra movement, superb Dutch photography collection, a very good collection of Dutch design and furniture and interesting collection of European and American trends in art since 1950 as works of Matisse, Picasso, Newman, Rauschenberg and Warhol completed with Italian Arte Povera and German modern painting.

The Stedelijk´s main building was built in the years 1891-1895 at Paulus Potterstraat, at the short walking distance from the Rijksmuseum, to house the collection of art and antiques left to the city by Sophia Augusta Lopez Suasso de Bruyn. It was designed by A.W.Weissman, Amsterdam city architect at the time. It was a period when Dutch architecture was searching for its values in the historical past. Happily, the Stedelijk´s neo renaissance façade, decorated with several figurative sculptures, has been during the following renovations modernized and simplified, losing much of its rich decorum. People of Amsterdam like the old Weissman building, perhaps because of the contrast it creates with the modern art collection exhibited inside.

The new building – the bathtub

In September of 2012, Queen Beatrix of the Netherlands opened the Stedelijk after more than eight years of renovation. At the back of the Weismann building, a similar in size modern building designed by the Dutch architect Mels Crouwel was added. Its form surprises the visitor as it looks like a huge bathtub, with the main entry to the museum now relocated to underneath, between the bathtub’s legs. The building’s form bluntly violates its beautiful neighborhood – the old Stedelijk building, The Concertgebouw, the Van Gogh Museum and the Rijksmuseum. On the other hand, the building gives an impression of being functional, at least on its ground level where it opens widely to the Museumplein.

At the moment current artistic events with all experimentations and new ideas dominate the museum exhibit. An interesting exhibit on history of Dutch design with some Gerrit Rietveld original pieces is also worth seeing. While the museum’s modern building is in itself an attraction, especially inside with its view on the Museumplein and a view on the walls of the old museum building now partly closed inside the new structure, visitor feel often lost in the museum modern metro-like spaces.

How to get to Stedelijk Museum

walking: from the Leidseplein direction Vondelpark and then from the park’s gate to your left along Hobbemastraat (street with the tram rails). The cross streets on your left will be Vossiusstraat, P.C. Hooftstraat, Jan Luijkenstraat and Paulus Potterstraat. Continue to enter the Museumplein with the Rijksmuseum on your left. Standing with your back to the Museum and facing the Museumplein, walk across the square towards the Concertgebouw – you will see the Stedelijk white building on you right. The entry to the museum is located between the bathtub legs.

by car: exit the A10 ring on S107 and drive direction Centrum via Zeilstraat, Koninginneweg and finally Willemsparksweg up to the end. Try to park your car in one of the streets near the Museumplein (metered parking at €4 or € 5 an hour, depending on the street), or use the underground car park under the square; the entrance to the Q-car park is located in front of the Concertgebouw at Van Baerlestraat 33b, 1071 AP Amsterdam. (€ 2 for each 21 minutes of parking time)

Stedelijk Museum in Amsterdam on the map