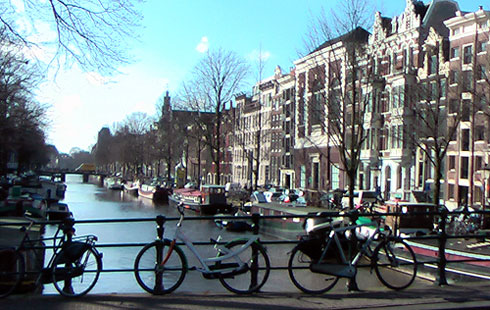 The Emperor’s Canal is the middle one of the three main canals in Amsterdam. It was named after Emperor Maximilian of Austria. It is 31 meters wide, the widest canal in the inner city. Together with the Herengracht and the Prinsengracht, digging this canal was started in 1612. On the photo above you can see the oldest part of the canal, where it joins the Brouwersgracht (Brewer’s Canal) Initially a wide boulevard without water was planned here, but the future inhabitants wanted water in front of their doors, so they could reach their house by boat.

When it freezes in winter, sailing on this canal is forbidden in order to keep the ice undamaged. As soon as the ice is thick enough, the Amsterdammers can skate on the Keizersgracht. That also makes it possible to organise the ‘Keizersrace’ (Emperor’s race) a sprintrace on the natural ice of the canal. 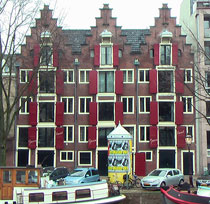 On nr 44 on the right hand side of the canal, you can see the three Greenland Warehouses from 1620. Rare, because they are the only warehouses in Amsterdam with step gables and ornaments. They were built to store whaling products. In the basements of these buildings there are a number of cement pits where whale blubber was stored. In these pits a total of 50 000 litres of blubber could be stored. Like many old warehouses in the city, these were converted into luxury apartments.

The name of this building on nr 102 refers to a hatmaker’s business that was located here until 1629. A year later the Remonstrant Brotherhood bought the premises and built a ‘hidden church’ there. Like the Catholics, the Remonstrants were also not allowed to practice their religion openly. It was a church until 1957. Today the main hall is frequently used for the recording of TV shows.

House with the heads 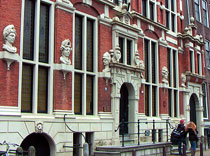 On the left side on nr. 123 is the House with the heads, nicknamed after the 6 heads that stick out of the gable. Legend has it that they were the heads of 6 robbers who tried to enter the house through an open basement window. The kitchen maid saw the robbers’ heads peeking into the window and cut them off one by one with a meat knife. In reality they are the heads of 6 Roman gods and goddesses: Apollo, Ceres, Mercurius, Minerva, Bacchus and Diana. The house was built in 1622 by municipal architect Hendrik de Keyser, who also built the famous Western church. 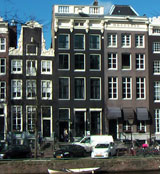 Again on the left side on nr 148, you see a hotel that looks like three merchant’s mansions from the 17th century. The 3 houses were joined together by a main hall and rebuilt in 1957 to form an exclusive luxury hotel with many unique features. A large, intimate garden features a traditional garden house that can serve as an exclusive private diningroom. 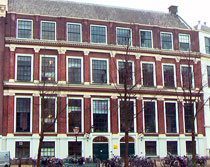 The Duch head office of Amnesty International occupies one of the most beautiful canal mansions in Amsterdam. It was designed in 1625 by Jacob van Campen, the same architect who built the Royal Palace on Dam Square and the Maritime Museum. It was built for Balthazar Coymans, who was one of the richest merchants in the city in those days.

The Western church was built between the Prinsengracht and Keizersgracht. In front of the church on the Keizersgracht side, there is a monument that is unique in the world. The ‘Homomonument’ (Gay Monument) commemorates the 70 000 gay and lesbian people who died in the Nazi concentration camps during World War II. The monument has the form of two overlapping triangles which together form a star. Part of one triangle sticks out in the water of the canal. That part is considered the main part of the monument. It is almost perpetually covered with flowers. Gay people from all over the world come to Amsterdam especially to visit the monument and put flowers on it. 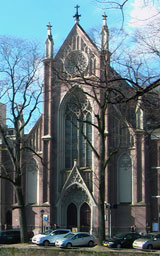 The Church of Our Dear Lady the Mother of God was built in 1854, shortly after the ban on the building of Roman Catholic churches was lifted. Architect of the in Neo-Gothic style designed house of worship, was Theo Molkenboer, who was the leading architect of Catholic churches in those days. As the Roman Catholic community in Amsterdam dwindled, the church was bought by the Syrian Orthodox Catholic community, which allows other denominations to use the church as well. 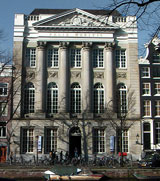 Felix Meritis means “Happiness through merit”. A society with that name was established in Amsterdam in 1777.Wealthy Amsterdammers, inspired by the ideals of enlightenment in those days, wanted to promote arts and sciences and financed a building that would house a concert hall and several rooms which could be used for meetings on natural sciences, literature, drawing and merchandising. The oval concert hall was world famous, musicians like Mozart, Schumann and Brahms performed their works there. Today it houses a European centre for arts, culture and science, where a large variety of cultural meetings and performances are staged. 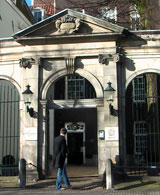 In 1637, the three gates on Keizersgracht 384 were the entrance of the first actors theatre in Amsterdam. The stage had impressive technical features which enabled rapid changes of scenery. Backdrops were lowered in place and a revolving stage could change the view from a forest to an indoor scene in seconds. On May 11th, 1772 at the end of a performance, the stage caught fire. The entire building burned down, the disaster killed 11 people. Afterwards, the rubble was all put through sieves to regain the gold and jewellery of the victims. Today, the gates give entrance to one of the most exclusive small hotels in the city: The Dylan.

On the left hand side on nr 401, the first museum in the country that was dedicated exclusively to photography as a form of art is located in a monumental building that was built in 1655. A wealthy French merchant, Isaac Focquier was the first occupant. He came from Marseille so he had a stone put into the gable with a picture of that city. Hence the name of the building and of the museum. The building has maintained the original 17th century lay-out and style and many decorations still date from the 17th century. 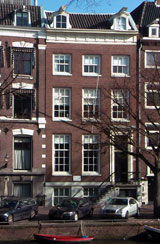 Adams’ initial mission was to find financial support from the wealthy Amsterdam merchants and bankers for the American warof independence against the British. At first he did not have much success, but when France recognised the new American republic and exchanged ambassadors, the Dutch bankers granted the USA a loan of 5 million guilders, which was a large sum in those days. After France, Holland became the second country to recognise the USA and Adams became the first ambassdor. He lived in Amsterdam from 1780 till 1782. in a relatively modest house, on Keizersgracht nr. 529. 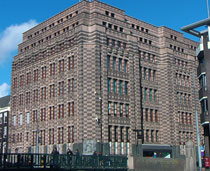 By far the highest building in this area, this was originally the head office of a bank. The municipal building code did not allow high buildings in the year of construction in1928. But the bank's directors bribed the city council into tolerance with a large gift, donating a new Mayor's residence on the prestigeous Herengracht. The bank vault in the basement is still there, but today visitors to the municipal archive can pass the massive doors of this vault to see exhibitions of historical events. The building dates from 1928 and is nicknamed the "Baazel", which was the name of its architect. 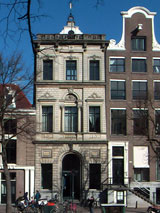 The building on the right side at nr 609 was built in 1863 to house the art museum Fodor. Coal merchant and art collector Carl Joseph Fodor died in 1860 and left an extensive art collection to the city. The Fodor museum existed until 1993. In that year, the collection was moved to the Amsterdam Historical Museum. In 2001 the building was renovated and expanded with the two neighboring buildings to house the photography museum Foam.

On nrs 672 and 674 stands a double merchants mansion that was built in 1672. A Flemish merchant, Jeremias van Raey was the first owner and occupant, but later several generations of the Van Loon family lived in the houses from the late 17th until the 20th century. Today Museum van Loon is located there – a very interesting museum because it is one of the few historic houses in Amsterdam where interior and exterior are still presaerved in their original 17th century state. Behind the houses is a beautiful Louis XIV garden with a garden house and a coach house behind it. The coach house serves as an official wedding location today.

The Geelvinck-Hinloopen house is a regent's mansion on the Herengracht (Gentlemen's Canal) that was built in 1687 For Albert Geelvinck and his young bride Sara Hinlopen. The coach house in the back of this mansion had its entrance on Keizersgracht. This coach house is now a museum which includes the magnificent garden inbetween the two buildings.

Keizersgracht on the map