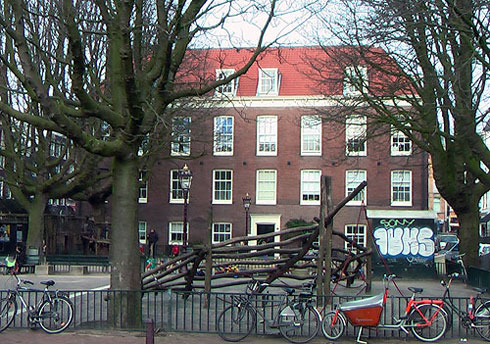 The Herengracht is considered to be the most important canal in the city. In the 17th century, the richest merchants and the most influential regents and mayors of the city lived on this canal. Even today, an adress on the Herengracht is seen as prestigeous and chique.

At the beginning of the Herengracht we find the Herenmarkt, a square that now serves as a children's playground. Behind the square stands the West India House, built in 1617. From 1624, the building served as the head office of the Dutch West India Company, a multinational which administered the Dutch colonies in North and South America. In the year 1625, a meeting took place in this building, in which it was decided to found the city of New Amsterdam. Which was later renamed to New York.

On the right hand side at nr 48 stands the merchant's house "the three hills" from 1612. The beautifully decorated gable was added in a restauration in 1768. The building is a national historical monument.

At the left side of the canal on nr. 81, we see the oldest residential house in Amsterdam, built in 1590 as a traditional merchant's house with a beautiful step gable.

Although the city was founded in 1275, most of the older houses date from after 1600. Initially, most Amsterdammers built wooden houses. In the Middle ages there were 3 big city fires in which almost all the houses in the city were destroyed. The last big fire took place in 1597. After tis fire, the city council put a ban on the construction of wooden houses. Only brick and stone houses were allowed to be built.

The house on nr. 132 at the right side of the canal was destroyed on New Year's eve of 2008 by a fire that was caused by a maroon. The house is a national historic monument which will eventually be rebuilt. In the 17th century this house was the stage of a dramatic love story between the rich merchant's daughter Elisabeth de Flines and her father's servant. Father Louis de Flines used all his power and influence to prevent a marriage between his daughter and the servant. Elisabeth eloped with her lover and the couple had a baby. But father Louis had her tracked down and brought back, and then he forced her to marry a gunsmith. 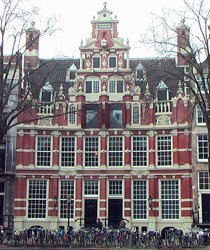 At nr 172 on the right side of the canal stands one of the most beautiful merchant's houses in Amsterdam. It was designed by municipal architect Hendrick de Keyser and built in 1617 for merchant Willem van den Heuvel, with money he inherited from his uncle Giovanni Bartolotti. After building the house, van den Heuvel had his name changed to Guillermo Bartolotti. He made his fortune as a silk merchant and banker. In his time he was one of the richest men in Amsterdam.

On the left side at nr. 255 there is The Hoxton hotel. A hotel created in one of the most beautiful locations in the Old City centre. Established in historical 17th and 19th century townhouses, this is a boutique hotel of excellent reputation. 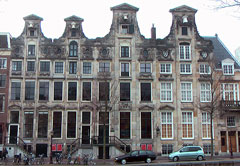 On the right side at the numbers. 364-370 you find the four Cromhout houses. They were designed in classicistical style by the famous architect Philip Vingboons, and built in 1660 for the extremely rich merchant Jacob Cromhout. This Cromhout and his wife Margaretha Wuytiers moved into the biggest of the four houses at nr 366, the other 3 houses were rented out. Today, two of the houses are occupied by the Biblical museum. Behind the houses is a garden with biblical themes.

At nr 413 on the left side is a well known restaurant with a French cuisine and an intimate design. The guest book of Zuid Zeeland carries the names of famous people like Al Gore and Matt Damon. 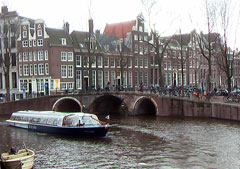 Behind the bridge on the right hand side is the Leidsegracht, the widest and most important of the four connecting canals between the three main canals. Until 1650, this canal was the border of the city. The city wall was on the right side and the houses on the photodate from a later period.

This merchant's house on nr 497 was built on a double lot for Willem van Loon in 1664. Originally, the house had a double stairway which led to a front door on the first floor. This stairway was removed in 1837. Today the building houses the Cat's Cabinet, a museum with works of art which are all dedicated to cats. In 2006, the house was the main location for the Amsterdam sequence of the movie 'Ocean's twelve' with George Clooney.

At nr. 502 on the right side stands 'The house with the pillars', the official residence of the mayor of Amsterdam. This double residence with 45 rooms was built in 1665 for Paulus Godin, slave trader and director of the Dutch West India Company. In 1926, the house was put into use as the official mayor's residence. It was a gift from the bank 'Nederlandse Handelmaatchappij'. The mayor's residential quarters are on the third and fourth floors. The ground floor and the first floor have reperesentational functions for the city.

On the left side at nr 581, the consulate of Italy is located in a double merchant;s house rom 1670. The gable is decorated with a large sculpture, depicting St. Michael attacking the dragon while standing on an elephant's head. 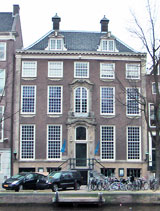 On the left side at nr. 506 is the Willet Holthuysen museum, built in 1687, gebouwd in 1687. The museum was named after the last occupant, Louisa Willet-Holthuysen. In 1895, she left her house and her art collection to the city. Since that year the house is a museum, which is interesting primarily because the 17th century interior is still intact.

There are only 3 historical residences in Amsterdam where the original interiors are still visible. In this museum, the interior of the building is more interesting than the art collection. A beautiful 17th century garden is part of the museum.

Herengracht Amsterdam on the map