Although Amsterdam in its central ring of canals is a unique, cramped, densely populated 17th century city, preserved almost intact throughout the centuries, it also has a number of city squares, which surprise visitors with their space, vitality and beauty. 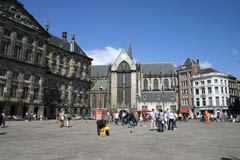 The central square of Amsterdam with important points of interest around one big square - the Palace of The Queen, the monument of freedom National Monument), a beautiful protestant church – Nieuwekerk and an elegant department store De Bijenkorf. The name Dam translates into English as a dam or a barrage because probably as early as 1270, the River Amstel has been closed here, and the harbor has been created behind. Like almost all city squares in the old center of Amsterdam, the Dam square has been originally the market and had a weigh house, which stood to the right from the Palace and has been only torn down in 1808 under the French rule of Napoleon, to make the square more elegant. The white stone National Monument on the Dam by a sculptor J. Raedecker and an architect J.J.J.P. Oud has been built in 1956. The monument commemorates the WWII victims, and since the 60-ties of the 20th c., it has been an important spot where young people meet. It has been renovated a couple of years ago, with the help of the German state.

A square literally surrounded by cafes, hotels and nightclubs always full of tourists who often like to meet other people in journey of both sexes. I the middle surrounded by patches of green an obligatory monument of the famous painter. Very busy place throughout the whole year.

If you want to spend time in the real centre of entertainment in Amsterdam, this is the place to be. The name translates into the square of Leiden. Amsterdam Central Station has been almost built on this square at the end of the 19c. when it seemed that railways will be the axis of our life. Leidseplein gets very busy in the evening – with many cafes, cinemas, theatres around and many street performers and visitors filling the square. 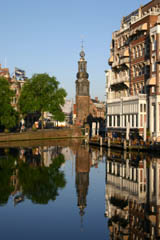 A busy street crossing created on the wide bridge on the Singel, the Munt (Dutch: de Munt) is an important orientation point, marked by the Munt tower and the Regulier's Gate, which is a remainder of the old city walls. Proximity of the Flower market, many cinemas, and two squares – the Waterlooplein and the Rembrandtplein, make it always very busy.

What was traditionally a biggest city market in the proximity of the traditionally Jewish quarters of the town is today more just a place dominated by a huge white building of an opera combined with the Town Hall called Stopera. You will find the market behind the Stopera. An important Jewish Museum is located at the square and the house Rembrandt lived and worked at its near proximity. Under the Stopera building there are two huge car parks – the best opportunity to park your car close to the city centre.

One of the three markets of the old Amsterdam (Nieuwmarkt, Westermarkt and Nordermarkt) which until today remain an important spaces for the city life. The Nieuwmarkt (New market) still functions as a market on some days of the week, but its is the proximity of the crowded Red Light District and more and more lively Chinatown that makes it busy any time of the day. An interesting de Waag (Weigh) building remains centrally on the square. You will certainly cross it not once on the way to the Rembrandt’s house, the Jewish Museum, Hortus Botanicus or the Zoo Artis.

With the highest in town Westertoren (Western tower) and the huge pink stone triangle of the Homo Monument behind the big Westerkerk church, situated centrally on the square, Westermarkt is today often a space for celebrations and outdoor exhibitions. The Anne Frank’s House is located just next to the square, directly at the Prinsengracht, behind the Westertoren.

Situated in the in the old district of Jordaan – Noordermarkt (Northern market), is an old market in the North of the old canal ring, but today as the tow grew throughout the centuries, very much in the old center. It still functions on Saturday and Monday as a market. On other days remains a quiet, empty space surrounded with trendy cafes and restaurants. 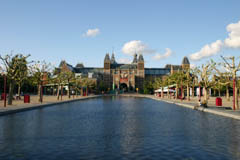 The most important square off the canal ring directly behind the Rijksmuseum. It is closed from the South-West by the 19th century the Concertgebouw (Concert building), home of the famous philharmonic orchestra. Previously just a vast open space with a busy street in the middle, the Museumplein was designed in its present relaxed form by a Danish architect Sven-Ingvar Andersson in 1999, as a result of the architectonic competition. If you stand on the square facing the Concertgebouw, you will notice two important museums on your right – the Van Gogh Museum designed by a Dutch architect Gerrit Rietveld and the spectacular exhibition wing by a Japanese Kisho Kurokawa with a new glass reception entrance behind; next to it the white bathtub shaped modern building by Amsterdam architects Benthem & Crouwel housing the Stedelijk Museum (Municipal museum), an interesting modern art museum.

Created by the covering of the Single in 1882, this small and relatively quiet square in the very center of the old town is an important place for the city culture. Several bookshops are to be found on Het Spui (the Spui), as well as literary cafes. Centrally on the Spui stands a small monument of a street boy called Lieverdje (‘Sweetie’) which reminds a visitor about the youth Provo movement of the 60-ties and the first protests against big corporations, which took place here at the time. Typically for Amsterdam, the Liverdje sculpture memorizing these events, has been offered to the city by a big tobacco company.