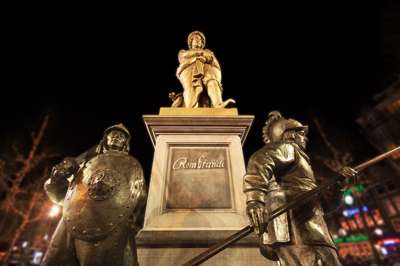 Rembrandtplein is one of the busiest squares in the city of Amsterdam. At least when it comes to nightlife and clubbing.

Originally a butter and dairy market, Rembrandtplein has long left its farm friendly origins behind and these days you are far more likely to find yourself enjoying a latte on the terrace of a café than buying milk from a farmer.

Of course, Rembrandtplein is named after the famous Dutch master painter, Rembrandt van Rijn, creator of works such as the Night Watch, and in the middle of the square you can find a large statue of the man, gazing down on the late night revellers with a rather thoughtful expression. Other attractions nearby include the Pathé Tuschinski, a modern cinema housed in a classic building that has been a theatre since 1921 and the largest interactive video screen in Europe that dominates one side of the square and can be interacted with using Bluetooth mobile phones. The main attraction for Rembrandtplein, however, is the nightlife happening in the many clubs, cafés and bars but even if you're not spending the night in one of the many Rembrandtplein clubs, you may find yourself visiting the square as many night bus lines leave from here.


How to get to Rembrandtplein

Coming from Central Station, tram 9 will take you straight to Rembrandtplein, the stop has the same name and is normally announced before you arrive. If not, keep an eye out for the large Rembrandt statue and video screen. From the west of the city, tram 14 passes through Rembrandtplein on its way east. On foot from Dam Square follow Rokin south until you come to Muntplein with its characteristic tower and turn left down by the large Pathé Tuschinski cinema.

Many of the most popular Amsterdam clubs can be found in and around Rembrandtplein. The square itself plays host to a number, while the surrounding streets are also packed with places to visit. Around the borders of the square can be found the chic and classy Club Rain and Escape, both of which are great choices to dance the night away and show of your latest designer fashions. More casual clubbers might find Studio 80 and its dedicated genre music nights of interest, while the cheap and cheerful Club Smokey across the square plays the hits. Those looking for Amsterdam gay clubs will find the nearby Reguliersdwarsstraat the place to be, while Amstel on the other side of the square plays host to an ever diminishing number of gay clubs and cafés.

Rembrandtplein Amsterdam is obviously the place to be for clubbers, but those looking for a slightly more low key night on the town may find it an interesting place to visit too. As well as the clubs dotted throughout the area, a large number of cafés, bars and pubs line the square. Hip Hop fans almost certainly must visit De Duivel at Reguliersdwarsstraat 87, Amsterdam's most happening Hip Hop bar and venue where Dutch and international acts can be found, while fans of more traditional music and atmosphere might find the authentic Irish pub Mulligans at Amstel 100 of interest. Backpackers congregate at Coco's Outback, an Australian themed bar on the square that offers large beers and steaks to go with them, and the Xtracold Amsterdam Ice Bar at Amstel 194 is one of the city's more unique drinking establishments, where warm clothing is a must.

Those looking for a place to stay in and around Rembrandtplein Amsterdam will find that there is a large selection of hotels and hostels to choose from. The budget Veteran hostel at Herengracht 561 may be a good choice for backbackers and students looking for a cheap place to stay near to the action, and it's not even too far from the museums, should you decide to leave the bars and clubs for long enough.

And those who would like to look at many other options can use the form below. The well known reservation engine "Booking.com" will provide you with a list of hotels and apartnemts around Rembrandtplein square: