Amsterdam cafés are what the Dutch call bars and pubs, not to be confused with Amsterdam coffeeshops, which are the city's marijuana cafés.  There are a number of different kinds of cafés in and around Rembrandtplein, ranging from the large grand cafés to smaller brown cafés, as well as themed bars such as sports bars, Irish bars and Ausatralian bars. 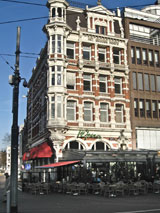 Grand cafés are generally larger than other cafés and pubs in the city. Not quite at the level of the British super pub, these establishments are still a decent size and can often be a little more expensive than their smaller cousins, especially if they open onto a major square such as Rembrandtplein.

The Three Sisters grand café opens out onto the square at Rembrandtplein 17 and is a very popular British style café and pub. The large terrace is a favourite for watching the world go by with a drink or a bite to eat, while the interior is filled with cosy nooks and crannies for a conversation over your pint. For a more classic Amsterdam café, l'Opera at Rembrandtplein 27–29 is a good choice. This grand café is housed in a gorgeous Art Deco building and inside its extravagant interior serves a wide range of options for lunch and dinner as well as a full selection of drinks.

The traditional Dutch brown café refers to a bar or pub with a low key, homely atmosphere suited to patrons having a quiet drink or snack as opposed to the more hectic grand cafés and modern bars. The term 'brown café' comes from the generally brown colour of these bars thanks to the wooden interior and decades of smoking customers.

Not all brown cafés have to be old, however, and Café Langereis at Amstel 202 is a relatively new Amsterdam café with an undeniably old feel. the cosy interior is filled with antiques and the menu offers a good selection of European beers as well as snacks and sandwiches. Other brown cafés near Rembrandtplein include the incredibly Dutch Café Bolle Jan at Korte Reguliersdwarsstraat 3 and Mulligans Pub at Amstel 100, which may be an Irish pub but has more in common with the brown cafés than most large commercial Irish bars.

Café De Duivel, which means The Devil Café, can be found a little west of the square at Reguliersdwarsstraat 87 and is a vital part of Amstrerdam's hip hop scene and many Dutch as well as international acts have performed here. On a Saturday night the bar can be crowded but the atmosphere is always electric and the music is cutting edge. If that isn't your thing, Coco's Outback almost on the square at Thorbeckeplein 8–12 is a backpackers' haven and, while it might not be the most sophisticated Amsterdam bar, the laid back atmosphere and varied crowd make it a good choice for those looking to mingle and meet people. Coco's also shows a lot of sports on its numerous big screens, making it a great place to catch the game or match.

The area around Rembrantplein has typically been a centre of Amsterdam gay scene, with many Amsterdam gay bars and clubs to be found here. In recent years many of these have closed down, but there is still a lot of choice for those looking for a gay bar near Rembrantplein.