Amsterdam's reputation as one of the most gay-friendly cities in Europe is well earned.

History of tolerance to homosexuality in Amsterdam

Relatively liberal attitudes in the first half of the 20th century led to the establishment of the first Dutch gay magazines, Levensrecht and Wij. The outbreak of World War II meant setbacks as Nazi occupation led to the oppression of homosexuality in the Netherlands. Real progress was made from the 1970s on, leading to the formation of many LGBT groups and the release of the Gay Krant magazine. The Netherlands became the first country in the world to recognise same-sex marriage in 2001, and Amsterdam’s then-mayor Job Cohen performed ceremonies almost immediately.

For any visitor looking for up-to-the-minute information on the Amsterdam gay scene, the Pink Point found close to the Anne Frank House at Westerkerk provides an excellent overview. The friendly folks behind the counter at this gay tourist information stand are always willing to help with maps, club night listings and insider advice. The Pink Point is open from 10:30 to 18:00 every day, and can be reached via email at pinkpointamsterdam@gmail.com. 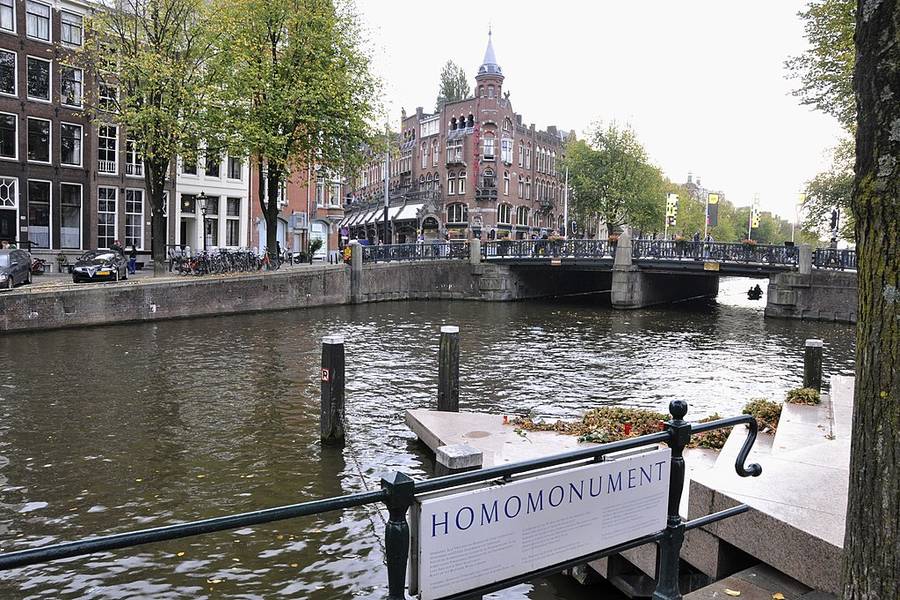 Found just beside the Pink Point at Westerkerk, the Homomonument stands as a tribute to all the LGBT people who lost their lives during the oppression of World War II. It has since come to commemorate all gay, lesbian, bi and trans people that have suffered persecution due to their sexuality. The monument consists of three triangles that form the points of a larger triangle set into the ground. The points of the triangle indicate the locations of the Anne Frank House, Dam Square’s National War Memorial and the headquarters of the gay rights group COC. Many visitors lay flowers on the monument in honour of those it represents.

One of the most popular annual events in the city continues to be the Amsterdam gay pride celebrations. When July turns to August every year, Amsterdam comes alive with street parties, club nights and the world-famous canal parade. Festival events are organised throughout the weekend, including the always-excellent Drag Queen Olympics in which contestants compete in games such as the handbag toss and the 100-meter high heel sprint. For more details check out our Amsterdam summer events listings.

The first gay bars in Amsterdam were founded in the 1920s, and the scene has gone from strength to strength since then. Today there are well over 100 Amsterdam gay bars, with many more LGBT friendly venues throughout the city. Look for the rainbow flag to easily spot gay venues. Check out our list of the best gay bars in Amsterdam, or our overview of the less common Amsterdam lesbian bars. There are of course plenty of excellent gay clubs to visit too, and a nice selection of gay hotels for those looking for the complete Amsterdam gay experience.